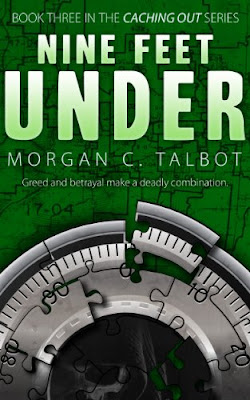 Description:
“Margarita and Bindi have big plans for the Fourth of July, involving borrowed bicycles, a geocaching power trail, live podcasts, and plenty of fun. But their day quickly goes awry when they stumble upon what looks like a murder in progress.

Author:
Morgan C. Talbot is a fan of puzzles and enjoys geocaching as a hobby as well as many other outdoor activities. She lives with her family in Eastern Washington. This is her third book in this series and I just discovered she has written several books in a different genre using a different name.

Appraisal:
This is the third book of Talbot’s Caching Out series and my favorite thus far. Trying to understand why it was my favorite I had an epiphany. Although varied in the specifics, they all have many of the same things. Margarita and her roommate, Bindi, who is a native of Australia, are the main characters. Their hobby of geocaching is part of the story in some way, although how much of the story and mystery involves this pastime is inconsistent. They always stumble onto an apparent murder victim and Margarita’s obsession with solving puzzles drives her to try and solve the crime. But none of that explains why this is my favorite.

FYI:
Although part of a series, each book stands alone and shouldn’t require reading prior books to understand and enjoy later books in the series.

Added for Reprise Review: Nine Feet Under was a nominee in the Mystery category for B&P 2014 Readers' Choice Awards. Original review ran October 7, 2013.