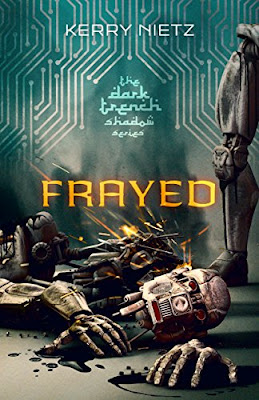 Description:
“ThreadBare is a debugger. He’s property, one of the Imam’s vast pool of implanted servants. He lives in a smelly, greasy garage on the boundary of the battlefield known as Delusion. All he wants is to complete his tasks, exceed his rival BullHammer, and stay alive. Possibly get a promotion.

Author:
“Kerry Nietz is a refugee of the software industry. He spent more than a decade of his life flipping bits, first as one of the principal developers of the database product FoxPro for the now mythical Fox Software, and then as one of Bill Gates's minions at Microsoft. He is a husband, a father, a technophile and a movie buff. He is the author of several award-winning novels, including A Star Curiously Singing, Freeheads, and Amish Vampires in Space.”

Appraisal:
I read and enjoyed Mr. Nietz’s A Star Curiously Singing. If you enjoy snappy cyberpunk writing, I definitely recommend that read. Frayed had a number of similarities in style and in the worldview, so I was looking forward to another trip to the author’s extraordinary hi-tech future world run by powerful Imams. I wasn’t disappointed.

Frayed is the first book in the DarkTrench Shadow series. The series premise of a secret project and a list of debuggers who have somehow broken free of their internal programming is foreshadowed throughout. My only complaint is the cliff-hanger ending that left me feeling that this installment hadn’t been cleanly finished in its own right.