Reprise Review: It Isn't Cheating if He's Dead by @JulieFrayn 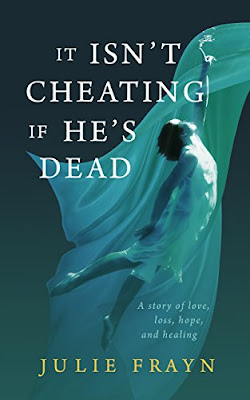 Description:
“Jemima Stone is tortured by the disappearance of her schizophrenic fiancé, Gerald. She seeks refuge from her pain by feeding the homeless.

Author:
“From nine to five, Julie Frayn is a mild mannered accountant. But the rest of the time, her writer alter-ego comes to life. When she isn’t counting beans or making things up in her head, she is mother to the two most perfect adults on the planet. She isn’t biased, just observant. When they were younger, they were perfect muses for silly poetry about smashed peas and birds with gastroenteritis.”

Appraisal:
Jemima Stone, Jem for short, is one those characters I found myself caring about almost immediately. She isn’t without faults (who among us is?), but she also has a way of taking a negative and turning it positive, which is a quality we could all emulate. An example of this is her obsession with finding her fiancé, Gerald, who disappeared. When she spotted a man that looked like him apparently living among the homeless in a park, she took to preparing and delivering food to the homeless in this park each morning. While initially this was with the hope of finding Gerald, it quickly became more about helping those in need and continued after he was found murdered in another city.

Format/Typo Issues:
No significant proofing or copy editing issues. There are a handful of occurrences of an invalid character that I suspect happened as part of the formatting or a file conversion process, but not enough to be a concern.

This is a wonderful book. Beautifully written, emotional and a pure delight.