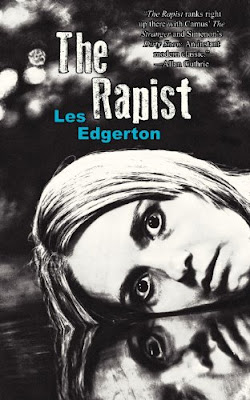 Description:
Meet Truman Ferris Pinter, a self-confessed rapist and murderer, currently residing on death row, hours away from his execution.

Author:
Les Edgerton is the author of fifteen books. He is an ex-con and served two years for a single charge of burglary, reduced from 182, two strong-arm robberies, an armed robbery, and a count of possession with intent to deal. Today, he's completely reformed. Prior to this Les served in the U.S. Navy as a cryptographer during the Cuban Crisis and the beginning of the Vietnam War.

Appraisal:
If you’ve read the author bio you’ll probably appreciate that I approached The Rapist with a degree of trepidation – Les Edgerton is one scary dude. In addition the subject matter would probably be difficult. The cover, of a woman’s face, eyes sightless, is haunting.

Socially inept (a gross understatement) and incredibly self-important, Truman is a strange guy. At the outset we meet Truman in prison, he’s on death row having been found guilty of the rape and murder of a young woman. Through the initial part of the story Truman admits and even justifies his actions in a quite unique voice. He feels morally justified in his actions because of who she is and who he is. He is a class above.
Here’s an example from the outset:

FYI:
A rape scene but not overly graphic.

Added for Reprise Review: The Rapist was a nominee in the Thriller category for B&P 2014 Readers' Choice Awards. Original review ran November 17, 2013

I really appreciate this review, Keith. This was my toughest book to write and I'm glad it came across to you the way I intended it to.

Thanks for dropping in and commenting, Mr. Edgerton.