Review: The Doll Harvest by Ron Savage aka @DoctorRonz 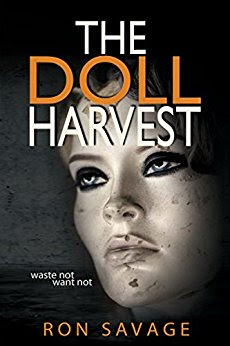 “The twins say I’m perfect and rare. ‘We had to look very hard to find someone like you.’ I am admired.

On the steps of her quiet brownstone, Nettie Harnell smells the sickly sweet scent of chloroform moments before she is abducted. When she awakens she’s in a dark basement chained to a post with nothing but memories of her mother and Paris to keep her company while she awaits her fate.

There is a shortage of medical donors in Philly, not that Carl and Vern Wachoski consider it a problem—it’s another business opportunity. Taking without permission has turned out to be incredibly lucrative, especially with Carl’s motto being ‘waste not, want not.’ But Carl’s arrogance could cost them everything if they don’t watch out.

Dutch Harnell is no stranger to depression since the tragic and violent death of his wife and son thirteen years before. Now it’s time for Dutch to pull himself together to save his one remaining family member, Nettie. With the help of Kapil Talpur, a young graduate student who witnessed the abduction, he finds himself drawn deeper into a world of greed and intrigue, where they can trust no one but themselves.”

“Ron Savage was a senior staff psychologist at a state mental health facility in Virginia and also had a private practice. Ron is the author of seven novels and two volumes of short stories, and has published more than 125 stories worldwide. He is the recipient of the Editor’s Circle Award in Best New Writing and was nominated for the Pushcart Prize. Ron is a member of PEN America and has also been a guest fiction editor for Crazyhorse. Some of his publications can be found in Film Comment, the North American Review, Shenandoah, the Baltimore Review, and the Magazine of Fantasy and Science Fiction.”

The story has three interwoven threads: Nettie and her abductors, her father’s attempts to rescue himself and his daughter, and professor Phan from Vietnam. First, I loved the way this novel was constructed. With three threads and their associated characters, things can easily get confusing. But the author used short chapters each prefaced by a piece of dialogue associated with that chapter’s point of view character—it worked very nicely and kept the plot straight in my mind.

I really enjoyed the albino twins who abducted Nettie. They were easily visualized and interestingly deranged. The father was a little difficult to connect with, possibly because of his depressing backstory, but his sidekick was believable and likeable enough to have me rooting for the two of them.

The Phan character didn’t really work for me. I never quite understood why Nettie’s father, Dutch, would want to do what the man expected of him, and he seemed a little stereotypically evil. But I can’t say that took much away from my enjoyment of the tale.

The author categorizes this as a thriller. I’d go more for suspense because I never really thought things weren’t going to work out. There was no end-of-world-level tension. Yet I did want to know how the threads would each be tied off.
Overall, a well-written, fun, fast read. Oh, and I loved the cover and the tagline—“waste not want not.”

There are a few F-bombs dropped, so be aware if you are sensitive to that sort of language.

Thanks for your kind review