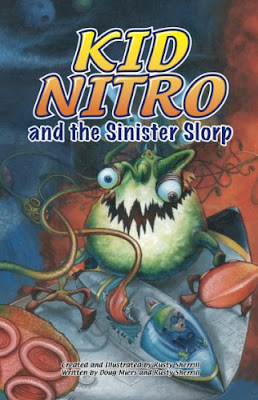 Rusty Palmer is a precocious little boy who perceives himself to be an imaginary super hero straight out of comic books. This week he thinks he’s Kid Nitro about to battle “mutant brain-eaters from the planet Ploog.” When he witnesses a meteor streak through the sky and plop near his backyard, Kid Nitro soon finds out he’s about to become the focus of a real battle for the survival of Earth itself.

Rusty Sherill started out his professional career as a graphic artist in the clothing industry. Since then, he has free-lanced for the movie industry, comic book companies, and advertising agencies. Today, Mr. Sherill lives in Big Bear City, CA with his wife, Cathy. Kid Nitro and the Sinister Slorp is his first novel.

Author Rusty Sherill has created a very entertaining novel for kids: Kid Nitro and the Sinister Slorp. The protagonist, Kid Nitro, imagines himself to be a super hero. However, soon he encounters an alien sphere from outer space. Quickly, the sphere takes over the boy’s life, to Kid Nitro’s glee. Along the way, readers will meet Kid Nitro’s nemesis, Catherine, a fellow third grader whose only flaw is her feminine gender. Then there’s best friend B4U who sees himself as a rapper who speaks only in rhyme.

Kid Nitro encounters aliens in space, weird monsters, and the indestructible Slorp, a planet eater with a bottomless pit for a stomach.

Parents will enjoy reading this book to their children, for some vocabulary and concepts may be too advanced for elementary age children to understand. Kid Nitro and the Sinister Slorp could provide entertaining hours for parents and kids to bond as they laugh and bite their nails over Kid Nitro’s exciting adventure.