Review: A Reason to Believe by Donna Fasano 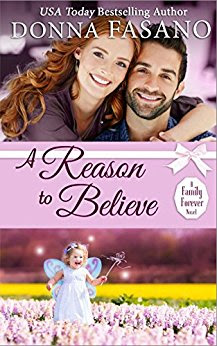 “It seems like a grand idea, temporarily trading her pixie wings for a womanly form to help handsome widower Paul Roland with his baby girl. And the moment she holds the precious bairn in her arms, Fern knows true happiness for the first time.

But Fern never anticipates the dizzying emotions she feels for the man who not only needs her as a nanny, but as a woman whose passion can heal his wounded heart. Suddenly the forbidden fairy rule she gently bends because of the baby is in danger of being irrevocably broken.

Some things are meant to be…”

“USA TODAY BESTSELLING AUTHOR DONNA FASANO is a three-time winner of the HOLT Medallion, a CataRomance Reviewers Choice Award winner for Best Single Title, a Desert Rose Golden Quill Award finalist, a Golden Heart finalist, and a two-time winner of Best Romance of the Year given by BigAl's Books & Pals Review Blog. Her books have sold 4 million copies worldwide and have been published in two dozen languages. Her novels have made the Kindle Top 100 Paid List numerous times, climbing as high as #1.”

“Oh by me heart” this is an enchanting story, which begins quite by accident. Paul Roland is an author who lost his muse and his wife, Marie, when she died two years ago during a difficult childbirth. Paul has brought Katy, their daughter, to visit and spend time with Marie’s parents in Ireland. Fern is an adventurous Pixie, full of curiosity, and a strong will. She is also not wary of humans, nonbelievers are unable to see all things magical. However, Fern gets great joy from playing and entertaining babies, who still have magical sight. And this is how she gets trapped in the sleeve of Katy’s sweater then ends up on an airplane headed to New York City. As Pixie Fern contemplates her predicament in a private space away from human eyes she suddenly finds herself transformed into human form.

The plot moves at a nice pace as Fern and Paul settle into a working relationship with Fern as Katy’s nanny and Paul tries to get back into his writing. Until Fern starts experiencing emotions she doesn’t understand and has no idea how to deal with. The twists in the story are enlightening, poignant, and honest. The depth of character development is much deeper than I expected in this type of story. Honestly I shouldn’t have been surprised, one of Ms. Fasano’s strengths is the depth of her characters and their realistic dialogue. But, I was expecting a lighthearted tale. Silly me!

Expect to be blown away by the complexity of the human spirit you will find in Fern and Paul’s journey in A Reason to Believe.

A Reason to Believe is book three in A Family Forever Series.

Thank you for the FABULOUS review! And thank you, too, for all you do for indie authors. We so appreciate your support!

Thanks for dropping in and commenting, Ms. Fasano. And for entertaining me with a fantasy romance tale. :D

Of course it's a Five Star! It's a Donna Fasano story. Love 'em all.

I know right? I didn't really know what to expect with this story and the fantasy element. But she hit it out of the park. :D

Thanks for dropping in and commenting, Ms. Weger.


Thank you so much for your consideration and advice! I think it will help me a lot. thank you for this good articles