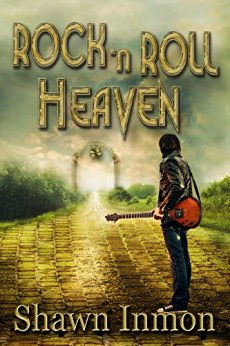 “Jimmy ‘Guitar’ Velvet isn't even a has-been; he’s a never-was. After a short trip to the bottom of a river, Jimmy is about to undertake the adventure of a lifetime. The celestial bureaucracy ships him to Rock ‘n Roll Heaven, where he meets the true icons of rock ‘n roll—and learns that even ‘heaven’ is relative. But, what impact can a small-timer like Jimmy make on the biggest stage in the universe?”

Originally from a small town in the southern part of Washington State, more recently Shawn Inmon has been a real estate broker in Enumclaw, Washington, near Tacoma. He married his high school sweetheart, “thirty one years after he first asked for her hand.” That story is told in his first book, Feels Like the First Time and gets a reprise in Both Sides Now, the same story told from the viewpoint of Dawn, his eventual bride.

Shawn Inmon’s first two full length books, while written to read just like novels, were actually autobiographical, telling the same true story, but from two different points of view. Rock ‘n Roll Heaven is Inmon’s first full length story where he didn’t know the basics of the story’s plot and all about the major characters going in.

I was happy to discover that he can still tell a good story, even when he has to make the whole thing up. The idea of a “Rock and Roll Heaven” isn’t new. (You, like I, probably have heard that they “have a hell of a band.”) But integrating that germ of an idea into a story with more meat than a three or four minute song is, well, another story. One that I thoroughly enjoyed. Part fantasy, part rock and roll adventure, Rock ‘n Roll Heaven also has some important lessons about life and priorities.

I often say that for many (most?) readers, hearing about the writing process is like a visit to the sausage factory, the route to finding out things you’re better off not knowing. However, the much longer than normal author’s note at the end of the book, telling the history of how this book came to be, was one I found to be an interesting and entertaining read in its own right.