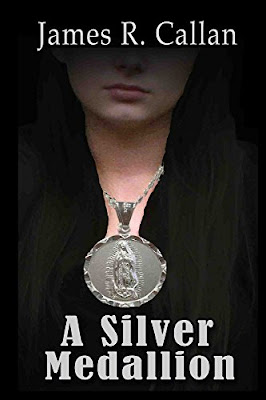 Crystal Moore, a specialist in information retrieval, encounters a modern-day runaway slave on her grandmother’s property and sets out not only to rescue the woman but also to bring down the man who held her. That effort leads to another slave whose children are captives of a gang lord in Mexico. Crystal travels there to rescue the children.

James R. Callan took a degree in English, intent on writing. But when that did not support a family, he returned to graduate school in the field of mathematics. Upon graduation, he worked in a research center, and vice-president of a database company. He has published eleven books: four non-fiction, plus seven mystery/suspense novels.

A Silver Medallion is an improbable tale of a computer scientist who travels to Mexico to rescue two children from a slave-trading drug lord, for the unlikely motivation of moral obligation.

A rational computer scientist would have gone to authorities. The author attempts explanations of why Crystal strikes out on her own, including the deaths of her parents, but does so unconvincingly. In Mexico, she is helped by a mysterious friend of her beau. He also risks not only his own well being but that of his family, again for reasons that are neither clear nor convincing.
Callan overreaches for emotional effect.

“Rosa turned away and this time, tears overflowed her eyes and ran down her cheeks. The Mexican’s consuming anguish enveloped Crystal and her eyes misted over even though she didn’t know the cause.”

“Her breathing accelerated, now rapid and shallow, and her jaw twitched as she clenched her teeth.”

Accelerated breath implies rapid and shallow, and it is difficult to envision a clinched jaw twitching. Nevertheless, I do get the point: Crystal was nervous. I would rather, however, not have it hammered home.

Such writing extends throughout the narrative.

For readers happy to accept irrational bravery for the cause of justice, A Silver Medallion has some fine points, including a travel log of Puerto Vallarta and dollops of quirky dialog.

“No, I don’t know what will happen to you, anymore ‘n I know which way a fish’ll turn. But you can bet your drawers I won’t turn you over to immigration.”
“But the probability of that happening is about the same as making a perfect soufflé during an earthquake.”

Also, Crystal gets chased up enough trees and gets enough rocks thrown at her to keep a reader turning pages.

Callan has published a guide to writing dialog, which is available for free on Amazon. I haven’t read it.

Not a distraction, but enough to be noticeable, including two spellings for a character’s name: Alita and Elita.

Just a quick Thanks to Sam Waite for the review of A Silver Medallion, and to Big Al for running the review.