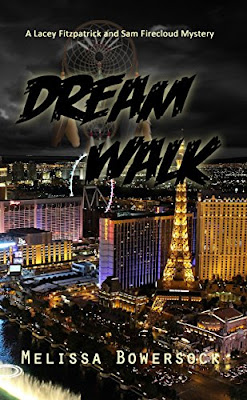 “Private investigator Lacey Fitzpatrick and Navajo medium Sam Firecloud are usually called to clear haunted locations of their lingering ghosts using Sam’s unusual talent for communicating with the dead. This time, however, the dead — Sam’s former brother-in-law — comes to him… in a dream. Now Sam and Lacey head to Las Vegas to figure out how to find the body and uncover a murder plot before the murderers bury them forever.”

Sam Firecloud, Navajo medium, is up against something a little different than he has experienced before. His dreams are being visited by someone he knew several years ago, and he is having trouble communicating with the spirit. When he calls Lacey, a PI and occasional partner, to get her advice on his dilemma, they both decide they need to check things out around his last known address in Las Vegas, Nevada. After Lacey finds a couple of reputable contacts in Homicide and Vice departments at the Vegas police department, Lacey and Sam head out of L.A. with few facts and no leads to follow.

Dream Walk has a bit of everything that makes this series so great. These include an excellent mystery, Sam using his empathic abilities to connect with the victim, the adventure of trying to locate a dead body in the desert around Las Vegas, as well as the sexual tension between Lacey and Sam exacerbated by outside parties. The secondary characters are well developed and realistic. This story also is the most dangerous Lacey and Sam have ever been involved with. They both learn, the hard way, that drug lords are not to be trifled with. But to prove a crime has even been committed at all, they need the dead body.

I found Dream Walk a tension filled, emotionally charged mystery as Sam and Lacey scour the dangerous side of Vegas. While also being confronted with their relationship as partners in business and the growing sexual tension between them. Decisions need to be made. Is Sam, with his introvert personality, going to step up to the plate? How will Sam’s kids react if he decides to have a personal relationship with Lacey? Find out now in Dream Walk.

Dream Walk is the fourth book in A Lacey Fitzpatrick and Sam Firecloud Mystery series. Each of these mysteries could be read as a standalone if you choose. However, I am enjoying the relationship developing between Lacey and Sam and recommend reading from the beginning to get the full benefit of their storyline.