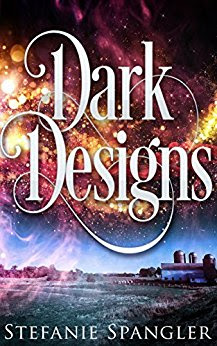 “Twins Ivy and Violet Grant are opposites. Ivy, a hot-tempered redhead, couldn’t wait to get off the farm and see the world. Violet, a quiet brunette, was content to stay home and help their grandmother with the family business. The one thing they have in common is their magic.

Charlie Logan’s sinister obsession with Ivy Grant has ruled his life. When he discovers a book of dark magic during a burglary, he decides to return to Oak Hill and use his newfound power to gain control over Ivy.

Ivy and Violet, with help from their grandmother, need to practice their magic to overcome the evil seeping into their lives. A battle is coming, and Ivy’s life is not the only one at stake.”

“Stefanie lives in central Illinois with her husband and daughters. When she's not reading or writing, she’s usually editing someone else’s book or vacuuming up someone else's spilled cereal. But she also enjoys gardening, knitting, and forcing others to read her favorite books.”

One of the reasons I chose this book to review is the beautiful cover design. I know better than to judge a book by its cover, but I’m an emotional reader and the artwork spoke to me. It’s sad the story didn’t deliver for me. I couldn’t connect with any of the characters. The book starts off with an incident that happened to Ivy when she was eight years old. Charlie Logan, a ranch hand, made advances towards Ivy in the barn. Grandpa Jack caught Charlie in the act, intervened, and threw him off the farm with a threat to never come back or Jack would kill him. This premise sets the theme of the story.

Then there is a time-warp that takes us to Ivy’s return from college to the farmhouse where she and her twin, Violet, were raised in by their grandparents. Grandpa Jack has passed away in the meantime, so, it’s Gram, Violet, and Ivy. Violet has taken over running the farm and Ivy wonders how she will fit in. She has an obsession with wanting to find her mother, Rachel, but nothing ever comes of that. I suppose Rachel will be addressed in book two? I had a hard time liking Ivy; I found her inconsistent, impulsive, and rather flaky. Gran has apparently taught her granddaughters some magic, but aside from reading the clouds and making protective spells, the reader is left clueless.

Needless to say, Charlie has returned to Oak Hills, in possession of a stolen book of black magic, with the intention of making Ivy his. For some reason, he is able to do more magic than the witches seem to be able to do. This was hard for me to justify in my head. Charlie is a malevolent soul of the most grievous sort. With Ivy back in town, he executes his evil plan. Our witches feel the evil in the air but just sit and wait for him to strike, more or less. When a small child who looks like Ivy is kidnapped, Ivy seems to pull herself out of her pity party.

This book moved very slowly for me. I found the characters’ behavior to be frustrating when I felt there should have been more growth. This is the author’s first book, so perhaps that is the issue here. I think maybe that some structural editing could have tightened it up and caught the issues that left me feeling a bit disappointed.

I did like Violet, she was stable and sure of herself. I also liked Officer Kevin Banniere and his developing relationship with Violet. The Chief of Police along with Kevin added a touch of realism to the story. The ending was way out of left field and unexpected. However it was not enough to save the book.

A small number of proofing errors including missing word, extra words, and repetition.