Review: The Sweet Oil of Vitriol by Daniel Eagleton 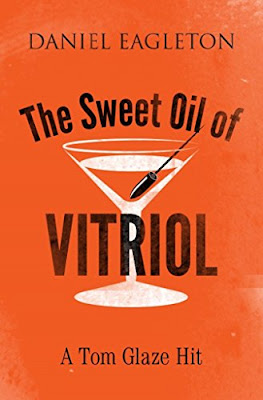 After a government sanctioned hit goes spectacularly wrong, Mossad agent Thomas is blamed for the mission’s failure by his superiors, ousted before completing his very first job. Desperate to prove himself, Thomas accepts an offer from his former handler, Yakov, to assassinate Jacob Okonjo, the head of the African Union. The story follows Thomas as he struggles to stay focused on the job in hand instead of giving in to sex and drugs.

The story started, as a good thriller should, with plenty of action. Thomas was painted as an A-type, highly driven to prove himself to his superiors in Mosad. Once his first hit fails, he struggles to handle the speed with which he is both blamed and ostracized by his superiors--a nicely set up internal conflict for the main character.

He is finally given one last chance to make good, which involves many months posing as a room-service waiter in the hotel where his new target will eventually stay. For me, the story lost its way here. His decline into booze and drugs and his penchant for beautiful women were beyond cliché. Thomas came across as weak-minded and undisciplined. This contradicted the profile he earlier prided himself on, and I couldn’t shake the idea that such personality deficiencies would have precluded this man from ever graduating as a Mossad agent.

Most of the novel was spend in this middle section at the hotel. The ending again delivered plenty of action, but Thomas’s character had been so undermined for me by that time that I couldn’t suspend disbelief sufficiently to accept him as capable of delivering a well-structured denouement.