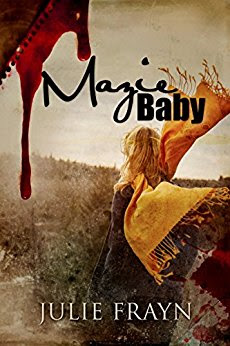 “When Mazie Reynolds was a young girl, she believed monsters lived under her bed. Now a grown, married woman, she discovers one sleeps in her bed.
Mazie schemes to save herself and her daughter. Her plan will work, if she can out-maneuver the monster who is a master of manipulation and control. She’s got one thing going for her, the one thing she truly owns. Mazie has moxie to the bone. But will it be enough?”

The author of three novels and two short story collections, Julie Frayn lives in Calgary, Alberta where she’s a senior manager at a historical theme park. Her novel It isn’t Cheating if He’s Dead was the top vote getter in the Chick-Lit/Women’s Fiction category of the 2014 BigAl’s Books and Pals Readers’ Choice Awards.

I liked Mazie Baby for several very different reasons. The main one is the portrayal of living with an abusive husband. The family dynamics between Mazie, her daughter, and husband rang true and gave me insight into the difficulties someone in that situation has in surviving or getting out. It made for some intense drama as does the story of what Mazie finally does when she realizes the time has come for a change.

However, it isn’t all unrelenting drama and vicarious stress for the reader, Mazie goes through what I’ll describe as an adventure. Her next door neighbor, who helps Mazie along the way, also provides a bit of comic relief. Just as with It isn’t Cheating if He’s Dead, another of Frayn’s books I’ve read, I loved Frayn’s characters. They hit the right balance between being realistic (not unlike people you know), and unique, so you aren’t sure where they’re going to take the story. An excellent read.

Uses Canadian spelling conventions (a cross between the US and UK). Some adult language.

One of my favorite books!