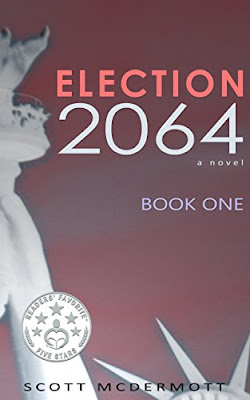 “Nearly five decades from now, America is finding its legs again after years of bitter conflict. Civ-2, as the Second Civil War came to be known, turned many of the nation's cities into battlefields and took millions of lives. Early in the 2060 campaign, Reformation League candidate Acton Granger made an unprecedented concession – he would forego a running mate and offer the vice presidency to his chief rival, whomever that may become. It was a gesture of unity that rocketed Granger to victory. Still stinging from defeat, the Conservative League’s Elijah Schroeder chose to swallow his pride and accept Granger’s offer, alienating his own supporters and political allies in the process.

Now two years into their fragile partnership, the 2064 campaign looms, and Elijah learns his selection was more complicated than the call for healing he and the country were led to believe. He must decide whether to continue toiling as a false symbol of harmony, or turn against the man who is now his boss and leader of the free world.

Meanwhile, other national figures emerge with their own designs on the election, from the Freedom League’s rebellious darling Shelby Monroe to the Progressive League's technology mogul Ben Allen, who could become the country’s first gay president.

As each contender charts their strategies and the barnstorming begins, a terrorist attack – orchestrated by a new, horrifying weapon – rocks the nation and turns all of their campaigns upside-down.

That is, all of them but one.”

“Scott McDermott lives in Virginia Beach with his wife and two furballs.”

This is quite a story. I’m inclined to call it dystopian because it has a lot of the elements of that genre, specifically a political slant that looks at a current direction some are advocating or trying to take the country and projects the slippery slope of going too far that way. In this case that direction is using what’s often described as “big data” to predict how voters will react to certain things and politicians positioning their campaigns based on that. (Google “Robert Mercer” if you’re interested in learning more about this.) However, dystopian usually implies the opposite of a utopia, a world you wouldn’t want to live in. The US in 2064 when this story takes place is no utopia, but it isn’t a dystopia either. But the questions and concerns it raises if you read between the lines aren’t much different from what you’d expect in the dystopian genre. Maybe it’s dystopian lite as well as being a political thriller set in the not-so-distant future.

Those tuned in to the current political landscape will spot other similarities in this future world the author has imagined. But there are also some significant differences that are interesting food for thought, for example there have been changes that have happened, moving from a two-party system to a multi-party system with the parties called “leagues.” How politicians and voters react due to the recent second Civil War and some changes in the political divisions in the country (there are now something like 75 states) are a few of the changes.

Overall, I found this story a satisfying and thought-provoking read in the same way a well-done dystopian novel might be, but also with the same intensity that would come from a good political thriller. If you like one or the other, this should do. If you’re a fan of both genres, what are you waiting for? My only complaint is the cliffhanger ending which has left me wondering when book two will be out. I’m ready now.

This is the first of a series.