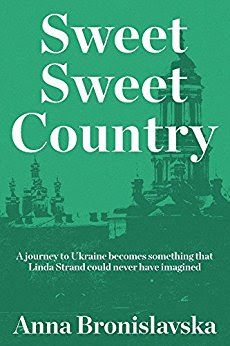 This book’s elements comprise the Swedishness of the main protagonist, Linda Strand: a travelogue aspect as we visit the cities of Kiev and Stockholm and countryside in Ukraine and Sweden: a thriller element, which deals with exploitation of children.

Swedish Linda Strand comes to Kiev to see her brother but he is missing, although nobody seems very worried by this. Linda later returns to Kiev to look for him. On her second visit, she penetrates a more dangerous world than the one she found on her first visit and, later in the book, the story of the children being used by the pornographers is poignant indeed.

Anna Bronislavska is a Ukrainian living in Sweden. It is interesting that she has chosen to write as a Swede about her homeland. The results ring very true. She has a good eye and ear for cultural specifics and she is – as she says of herself – passionate about both countries.

Most of the action takes place in Kiev, we are shown the city through the eyes of a stranger, we see inside the museums, we share the food (a lot of it sweet, hence the book’s title). Some of the book is set in Stockholm, where we get a glimpse of Swedish family, professional and city life. There are excursions into the Ukrainian and Swedish countryside.

The first half of the book proceeds at an unhurried pace, interesting characters live their lives; they enjoy meals, visit places and friends, taking Linda with them. It is a fine travelogue, juxtaposing the cool efficiency of Sweden and the Swedish with the passionate underground theatre and indie-film scene in vibrant Kiev.

Bronislavska’s writing from the points of view of the teenage boy and the little girl being abused is very fine. A don’t ask/don’t complain attitude comes through, which feels like a hangover from Communist days. In Ukraine, says one character, even today it is not wise to question a disappearance. The description of the squalor in which the children are kept is heart-breaking

Unfortunately the sum of the book is less than the interesting, individual parts. There is rather a lot of repetition which slows the already leisurely pace (eg ‘He made it his home. He lived here. It was his.’). Sometimes we slip outside Linda Strand’s viewpoint to get a global view, but the ‘voice’ remains Linda’s. I found this confusing when her ‘voice’ was applied to a villain wearing aviator shades. Organisation of the material occasionally misled. There is a scene in which a stranger insists on buying Linda a ticket for the theatre for no apparent reason. They sit side by side but do not exchange a word. We do not see him leave. It is a bizarre scene. It is explained later in the book, but makes no sense at the time. The prologue would have been more help at the end of the book.

At the end of the book the various strands are ably tied, but earlier in the book the dangling ends became a little frustrating, for this reader.

One strand of this book is child pornography. However, apart from a graphic beating, all the abuse happens ‘offstage’.

An editor’s input to this book would have improved the reader’s experience.