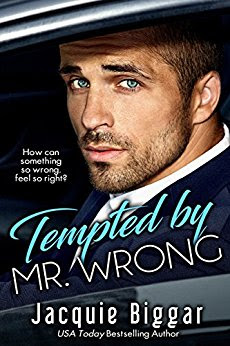 “Falling for her step-brother is a mistake T.J. doesn't want to repeat, but one look into those sapphire blue eyes and she's ready to give Jason whatever he wants.

Tammy-Jo Hawthorne's marriage was floundering, but she never expected her husband to make her the laughing stock of Magnolia.

And she definitely didn't expect to trip over him in their front yard after he'd been murdered.

Jason McIntyre was forced out of his home and the love of his life by the man who'd haunted his nightmares for ten long years.

“Jacquie Biggar is a USA Today bestselling author of Romantic Suspense who loves to write about tough, alpha males and strong, contemporary women willing to show their men that true power comes from love…

She has been blessed with a long, happy marriage and enjoys writing romance novels that end with happily-ever-afters.

Jacquie lives in paradise along the west coast of Canada with her family and loves reading, writing, and flower gardening. She swears she can't function without coffee, preferably at the beach with her sweetheart.”

Tammy-Jo Hawthorne is having the worst day of her life. Her husband has just humiliated her at the country club in front of all of their friends. He’s cancelled her credit cards, turned off her phone, and had her Jaguar towed away from the club. Now it is pouring rain and she’s twenty miles from home. To top it all off she breaks the heel off her Louboutin.

Then her savior, who had been in the bar at the country club and saw it all, pulls his shiny black Mustang to the side of the road to give her a lift home. Jason McIntyre, her step-brother who she hadn’t seen in ten years, isn’t home for a family reunion. He’s on a covert mission investigating her, her husband, and her father’s involvement in a colossal Ponzi scheme. He is going to find it difficult not to blow his cover, especially after he drops Tammy-Jo off at her gated home and she trips over her husband’s dead body.

The plot moves fast and the suspense is high as the case now involves murder. The characters are all well developed and realistic. The dialogue fits the situations that arise as the plot twists. It’s hard for TJ and Jason to deny their attraction is as strong now as it was in high school. And it’s heartbreaking watching Jason come to terms with his mother’s increasing dementia.

I only have one complaint. Jason leaves his Mustang for TJ to drive when he takes his mother to dinner, with a note for her to join them when she awakens from her nap. Men don’t just leave their babies for any woman to drive, it was a sweet gesture. However, when Jason and his mother leave the restaurant they end up in a car chase and Jason and his mom are suddenly in his souped-up Mustang. I understand he needed it at that moment and his mother is adorably priceless during the chase. It is one of my favorite scenes in the story. Since this situation doesn’t affect the plot, I am hesitant to take any marks away. It is also the ONLY editing or proofing issue I came across, so I’m willing to let it slide.

If you are in the mood for a sexy romantic suspense, I would recommend Tempted by Mr. Wrong.

Only the issue I mentioned above.

Thank you for the fantastic review!
Yes, a reader kindly pointed the Mustang problem out to me and I've since corrected it. Appreciate the heads-up :)

You're welcome, Ms. Biggar. I'm glad you got the Mustang squared away. Thanks for dropping in and commenting.