Review: The Downfall of a Belly Dancer by Kerrie Noor 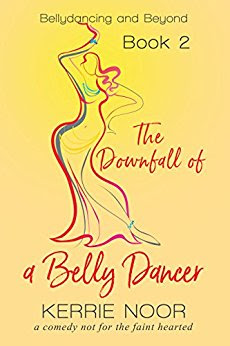 The Downfall of a Belly Dancer is a comedy for women who love to laugh, believe in romance but like it served with a bit of reality.

Nefertiti’s life is sinking into the Scottish sunset…

At one time she ran a troupe of belly dancers, now she has three reluctant pupils. Zumba has stormed into Argyll and taken all her gigs. Her diary is as empty as her class and Nefertiti can’t cope.

Disappointed, Nefertiti turns to Rodger her ‘rock’, mentor and partner, but he has other plans and has retreated into his shed. And Nefertiti is desperate to find out why.

The Downfall of a Belly Dancer is the second in the Belly dancing series- a satirical look at romantic comedy with whole new meaning to a happy ending.

“Kerrie was born in Melbourne Australia in 1960 but has spent most of her adult life in Scotland. She arriving in Argyll in 1980's on a working holiday and 'just ended up staying'. Kerrie works for Alzheimer Scotland. She is also a regular on Dunoon Community Radio practising her comedy and storytelling skills while learning about obscure bands and the hidden night life of Dunoon. She teaches and performs Belly dancing and is currently trying to develop her talents as a story teller. In the past she has 'done' a little stand up and appeared at the Edinburgh Festival. She writes under the name of Kerrie Noor”

As Nefertiti’s egocentric life is falling apart at the seams, she is sent into a tailspin trying to figure out what has gone wrong. The story is full of quirky characters who are well-developed and unique. Each one adds their own flavor to Nefertiti’s dilemma. But when Roger builds his ‘man shed’ on the spot Nef had chosen for her pyramid she is devastated. To make things worse all of her belly dancing class, women she referred to as her Sisterhood, have abandoned her for the new Zumba class in town. It seems like the only friend she has is the town’s bag-lady who has taken up a spot in front of Roger’s book shop, where Nef and Roger trade working days.

I wish I could say the bag-lady was the quirkiest character in town, however she isn’t, despite feeding and herding the geese and swans around the lake behind the church. When the town starts a petition to report her to Social Services to find her a proper home, Nef comes to the rescue by offering her a place in her home. That doesn’t go quite as planned though. The bag-lady constructs a teepee in Nef’s backyard by the garden to live in along with a fire pit, which becomes an evening gathering place with many stories. Nefertiti’s journey is an interesting one that ends up involving practically the whole town.

The Downfall of a Belly Dancer is book two in BELLY DANCING and BEYOND Series. This book also contains several F-bombs and adult subject matter. There is also a small glossary at the end of the book to help with the Scottish terms, which Ms. Noor uses, along with UK spelling.

I came across several proofing misses such as: wrong words, missing, or extra words. Also, Kay was called Kate on the same page she had just been called Kay. Because of these issues I had to deduct a star.