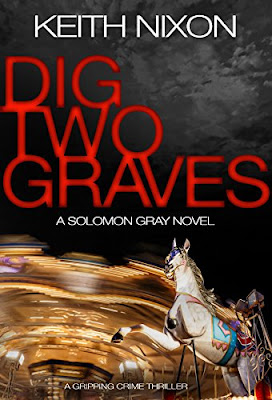 “When teenager Nick Buckingham tumbles from the fifth floor of an apartment block, Detective Sergeant Solomon Gray answers the call with a sick feeling in his stomach. The victim was just a kid, sixteen years old. And the exact age the detective's son, Tom, would've been, had he not gone missing at a funfair ten years ago. Each case involving children haunts Gray with the reminder that his son may still be out there - or worse, dead. The seemingly open and shut case of suicide twists into a darker discovery. Buckingham and Gray have never met, so why is Gray's number on the dead teenager's mobile phone?

With his boss, Detective Inspector Yvonne Hamson, Gray begins to unravel a murky world of abuse, lies, and corruption. An investigator from the Met is called in to assist, setting the local police on edge. And when the body of Reverend David Hill is found shot to death in the vestry of Gray's old church, Gray wonders how far the depravity stretches and who might be next. Nothing seems connected, and yet there is one common thread: Detective Sergeant Solomon Gray, himself. As the bodies pile up, Gray must face his own demons. Crippled by loss but determined to find the truth, Gray takes the first step on the long road of redemption.

Set in the once grand town of Margate in the south of England, the now broken and depressed seaside resort becomes its own character in this dark detective thriller.”

This is the first of the Solomon Gray series and I’m already a fan. Gray is a detective and the main story thread appears, at least at first, to be a straightforward (although certainly unique) murder case. I anticipated a straightforward police procedural. It might have been except for Solomon Gray’s past, which haunts him in many ways and I think tends to change the way he views and approaches crime solving. As the story alternates between the two threads, us learning about Gray’s past and observing his efforts to solve the current case (eventually cases) the two threads start getting tangled with each other. I never saw that coming.

The result can be viewed as a police procedural or noir crime fiction or a bit of both. But what struck me is that the underlying story has more depth than is typical of either.