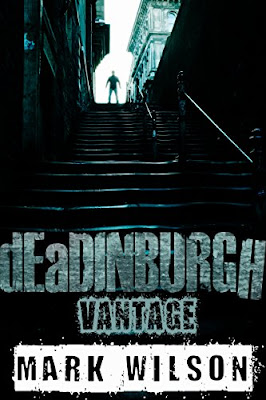 Edinburgh 1645, the time of the bubonic plague. The victims are locked underground in catacombs. 2015 and these same catacombs are opened, the plague attacks the Scottish population. 2050 and Edinburgh is quarantined off. There are rumours of a cure, but finding the source is believed to be certain death at the hands of the zombies. Joey MacLeod is a trainee 'priest' part of a church that worships the zombies. But he escapes and with the help of Alys Shepherd learns about his past and the real source of the zombies.

Mark Wilson is a biology teacher in Fife, Scotland. He is also the author of four novels, his most recent being dEaDINBURGH. In addition Mark formed an independent publishing company in 2013 to publicise Scottish authors. The author lives in Edinburgh with his family.

Now I don't usually read dystopian or zombie novels. With a very few exceptions I don't get on with either genre particularly well. If there's a zombie TV programme, such as The Waking Dead, I usually switch off eventually. I also very rarely read YA either. However, I have previously greatly enjoyed Mark Wilson's writing - so I gave dEaDINBURGH a try, and I'm glad I did. This is one of those aforementioned rare exceptions.

So, the premise is a disease has created zombies, but there are still a few humans clinging onto life. There are several interdependent communities and we receive protagonists from each to drive the story forward. There's a group of zombie worshippers, literally religious nuts - Joey is a youth reluctantly waiting to be ordained to serve the zombies for the rest of his life. But there's something mysterious about his past, he's an orphan and doesn't know who his parents are. Padre Jock is one of the order, but he's not like the rest, he seems to know something about Joey. Then there's a community of women, no men are allowed - Alys is a born fighter, but questions why they have to be separated from the rest. Then there's Bracha, a vicious survivalist who'll do anything to stay alive.

Okay, so far so good. I was intrigued, caught by the characters, interested to see what happened next when the pair, Joey and Alys, 'escape' their respective confinements and go into the wider world accompanied by Jock. The kids are naive but learn quickly, and brutally. Then Wilson delivers several twists and surprises which elevates dEaDINBURGH beyond a straightforward zombie novel. I won't reveal what they are as you should find these out for yourself, but they're to do with Joey's past and the zombies themselves. The conclusion sets us up for book two very neatly.

Edinburgh and its surrounding countryside is a great backdrop, the author uses the scenery well. The characters are strong and the story drives along at pace. The zombies aren't really the major part of the story, there are touching inter-relationships that develop, taut situations the characters must develop. All in all an interesting, intriguing book. I'll be reading the follow up for sure.

Despite the zombies, nothing of note, which as it's YA, that's good.