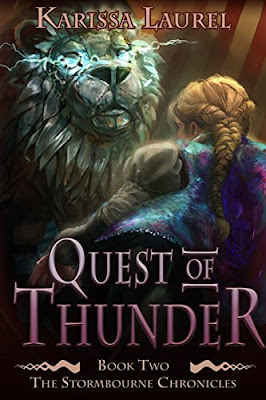 “Evelyn Stormbourne has overcome revolutionaries, pirates, devious relatives, and powerful Magicians to claim her birthright as Lady of Thunder, but before she can embrace her dominion over the skies, her powers falter, leaving her impotent and adrift. Under the protection of her stalwart companion, Gideon Faust, Evie hides in anonymity and searches for news of the Fantazikes who had once promised to help her master her divine abilities.

Without her capacity to control the storms, Evie wonders how she’ll ever reclaim her throne—a legacy she’s not convinced she deserves. But when a fearsome nemesis from her past reemerges, she embarks on desperate quest to find the Fantazikes and restore her powers. If she fails, her enemy’s dark Magic will enslave her, forcing her to destroy everything and everyone she loves.”

“Karissa lives in North Carolina with her kid, her husband, the occasional in-law, and a very hairy husky. Some of her favorite things are coffee, dark chocolate, and super heroes. She can quote Princess Bride verbatim. She loves to read and has a sweet tooth for fantasy, sci-fi, and anything in between.”

Evelyn Stormbourne, Lady of Thunder and the Crown Princess of Inselgrau has lost her connection to the skies. Evie is now on a quest with her companion and protector Gideon Faust. Their goal is to locate the Fantazikes, a clan she met in her first adventure, Heir of Thunder. They live and travel in airships powered by lightning. They once promised to help her master her divine abilities.

When tragedy strikes from an old nemesis Evie is forced to leave Gideon behind and go on the run searching for a safe place. Where better to hide than a traveling circus? However, this isn’t just any ol’traveling circus. She is allowed to stay, but Evie has to earn her keep for passage by working in the kitchen wagon and cleaning up each morning. In the afternoon she mends and repairs costumes. The circus workers are colorful and unique folks who all speak different languages. Evie has to find a way to communicate with them and make friends, while keeping her own true identity hidden for everyone’s protection. There is more to this circus than meets the eye and Evie intends to learn its secrets.

This book is full of evil magicians’ and devastating battles, not only with magic, but with crossbows, swords, knives, and guns. Several twists in the plot makes it hard to set the book aside as tension grows. All is not as it seems and the world is smaller than Evie ever imagined. The steampunk elements are surprising and magically delicious. There is a romance blooming between Gideon and Evie that only takes up a small portion of the novel as Gideon patiently chisels away Evie’s walls. He has my heart already. And I hope to see more from the circus crew in the next book. Evie’s journey to reclaim Inselgrau is bound to be spectacular. I can’t wait to see how Ms. Laurel wraps this trilogy up.