Reprise Review: The Road to Nowhere by Shana Hammaker 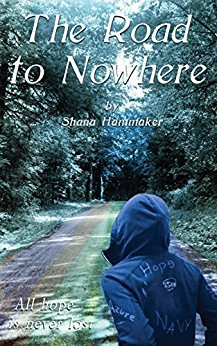 Nowhere is hidden not too far east of Somewhere, just past No Man’s Land. It is a desolate place with secrets of a hidden past.

Someone is sabotaging the construction of a highway from the happy hamlet of Somewhere that leads straight to Nowhere. Amarillo Saffron, Mayor Orange’s secretary for the town of Somewhere, seeks to uncover corporate corruption and biotech espionage as well as expose the secrets Nowhere is hiding.

“Shana Hammaker grew up in sunny California, but dreamed of escaping to cooler climes. She considered Bangor, Maine, possibly because her favorite author, Stephen King, lives nearby, but instead, ended up in Tennessee where it is warmer and more humid.”

“… it was in this sultry Southern climate that Shana realized her destiny: to read and write stories in which weird and frequently horrible things occur. (Twelve Terrifying Tales for 2011) And also, on occasion, to write quirky little memoirs.”

Ms. Hammaker is the author of The Cookie Dumpster and Hieroglyphs along with her set of thriller short stories from Twelve Terrifying Tales for 2011. Feel free to check out Ms. Hammaker’s other books on her Amazon author page or Goodreads.

This is a unique story in that the urban fantasy world sits smack dab in the middle of our own world. Somewhere’s biotech firm Ardor Labs claims to have perfected a system to help people live happy stress-free lives. With their emotion actuator inhaler one can breathe their stress into it at night for a restful emotionless sleep or inhale hope out of it during the day if you start feeling down or stressed and a vitamin called Actify! to start each day anew. Inhaling hope out of the actuators has a drug like quality to it, so when it becomes evident that someone is stealing hope, officials get concerned.

Meanwhile in Nowhere there is very little hope, it’s a dead little town with no color that is surrounded by a force field, and No Man’s Land is downright toxic situated between Nowhere and Somewhere. One of Nowhere’s biggest secrets are the lost children living hidden from the world inside its secured border. I felt like I had stepped into one of Tim Burton’s domains here, I love his style and perspective.

Cerulean, age eighteen, has been living in Nowhere for nine years and is one of the oldest inhabitants besides Mayor Blue. She does her best to take care of and protect the young children when they mysteriously appear at Gruesome Point on the southern edge of Nowhere. Mayor Blue sustains his life-force with children’s tears and has evil designs for Nowhere.

The characters are colorful and well developed. When a small gang in Nowhere, who call themselves Outlawz, are given a taste of the stolen hope from Somewhere, they go to desperate measures to insure they get more, and things go from bad to worse. When Amarillo Saffron, with the help of investigative reporter Fern Viridian, looks into Deputy Mayor Scarlet and Ardor Labs, wondering about their connection to Nowhere, the plot takes clever and devastating turns. This story has a dystopian feel to it at times as the plot moves forward and truths are revealed as their society starts to unravel.

Ms. Hammaker does an excellent job painting a picture of the desolate Nowhere and No Man’s Land world with her prose and uses colorful character names for the inhabitants of Somewhere, which is a much more hopeful place until the storm hits…  The dialogue is realistic and convincing even between the children of Nowhere when they decide to take a stand against Mayor Blue. There are lessons to be learned here in this clever skillfully told and at times frightening story.

Added for Reprise Review: The Road to Nowhere by Shana Hammaker was the winner in the Paranormal category for B&P 2015 Readers' Choice Awards. Original review ran October 15, 2014

Review is based on an advance reader copy. I am unable to judge the final book in this area.