Review: The Road Most Travelled by J. Kairu 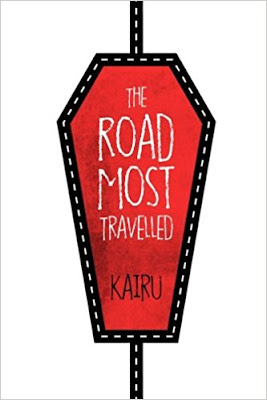 “In a world where life breaches dangerously close to death, the Taker has come to collect. Past side street brothels, secluded houses, flooded slums and sterile high rise blocks, he remains determined to fulfil his mission – but who is he here for, and why?”

“Kairu is a Kenyan-born, Melbourne-based writer. As an only child, writing became a means of creative escape, and slowly evolved into a deep need to express and understand herself and others.”

The premise of this book is that someone known as the “Soul Taker” will come to escort you to where ever you go when it’s time for you to move on from this life. The book has been described as a novella, which is one valid way to look at it. Another way to describe it might be a collection of linked short stories. With the exception of a short introduction to the concept of the soul taker and an epilogue at the end, each chapter is the story of one person’s final moments before being escorted away by the soul taker who is the only character that ties the whole book together.

The concept was clever and each episode engaging. It’s a quick and thought provoking read. If the premise appeals, definitely worth your time to give it a try.

The author lives in Australia. This is reflected in both word usage/slang as well as spelling conventions used.