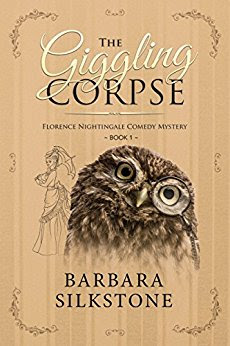 “A trailblazing figure in nursing, Florence Nightingale faces a series of bizarre mysteries for which she must use her nimble deductive powers while aided by her little pocket owl, Athena, and her sweet but snarky sidekick, Poppy Throckmorten.

In this first book in the series, the ladies journey to Greece on a mission for young Queen Victoria, the successful completion of which will fund the Nightingale School for Lady Nurses—the first of its kind in England.

Armed only with her quick wit and a rock-hard India rubber ball, Poppy is determined to assist Florence in securing the donation promised by a wealthy Greek philanthropist. But before they can return to England, the gift is stolen and one member of their British contingent is dead—was it murder?

Can Florence and Poppy find a possible killer and recover the endowment before they must answer to the Queen? And what’s with the giggling corpse?”

“Barbara Silkstone is the best-selling author of both Regency Pride and Prejudice variations, including the popular the Mister Darcy Series of Comedic Mysteries, and Pride and Prejudice contemporary variations. All her books are light comedies based on Jane Austen's timeless tales of love denied and love discovered. ‘Feel good’ tales to warm your heart.

She is also the author of the Wendy Darlin Comedy Mystery series. Five coffee-snorting tales that combine cozy with outrageous adventures.

Plus a mixed bag of standalone cozy comedy mysteries: Zo White and the Seven Morphs, Cold Case Morphs, and The Secret Diary of Alice in Wonderland.”

Florence Nightingale is a mere nineteen-years-old when she is summoned for attendance with Queen Victoria. This story is told through Poppy Throckmorten, a friend/attendant who has aspirations of being a writer. She has been keeping a journal of Florence’s ministrations with the sick and injured since the day they met. Poppy is sixteen, she admires Florence’s independence, straight-forwardness, and self-confidence. She aspires to have the same qualities, however, she’s snarky and says things before thinking. She is also a bit of a klutz when she gets nervous. Florence chooses Poppy to go with her to see the Queen. Poppy’s mother insists that grandmother, Alice Throckmorten, chaperone the young ladies.

The story is well researched and planned out with fully developed characters. As the adventure begins several secondary characters are introduced and Florence shows off some of her deductive reasoning skills. There is a nice pace and it doesn’t take long for twists in the plot to start and they just keep coming. The evening they reach their destination the mystery materializes or dematerializes in this case. Can Florence use her analytical and deductive powers to solve the mystery and can Poppy keep up with her without tripping? Or falling in lust/love with a certain queen’s footman? Because baby-making is eeewwww and not in her future!

I think The Giggling Corpse is a perfect start for this new series. Florence and Poppy make a good pair, and play off each other well. I seriously don’t think this will be the last we see of Roger Broadribbs, Poppy’s self-appointed bodyguard from back home. I can’t wait to see where Ms. Silkstone takes Florence and Poppy next. This is a nice cozy mystery with tongue-in-cheek humor. I also want to mention the historical notations after the story where the author got inspiration for some of her characters.

Thank you for the sweet review!
Cheers!
Barbara Silkstone

You're welcome, Ms. Silkstone. This is going to be a fun series to follow.