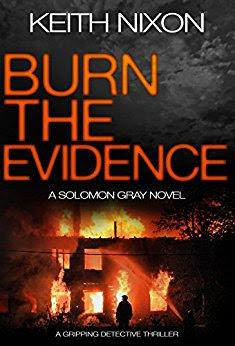 “A body washes up on the beach near Ramsgate in the South of England. For DS Solomon Gray, the case appears cut and dried—a drowning. An immigrant.  Another victim to the sea in his desperate attempt to reach the UK.

As the tidewaters recede, two more corpses surface. One appears to be a refugee, stabbed to death. The other, Gray recognises immediately. Regan Armitage: son of business tycoon Jake Armitage. Gray knows this means trouble.

A post mortem reveals ligature marks on Regan's wrists. Drugs in his bloodstream. All signs indicate murder. Armitage swears to track down his son's killer and avenge his death.

Gray's investigation points to a deadly fire ten years prior, and soon Armitage comes under suspicion. But DS Gray knows what it's like to lose a child and puts aside his distrust of Armitage to help.

How are the dead men connected to each other—and to the infamous fire?

It's then that Gray gets another tip on the whereabouts of his own missing son, Tom...”

“Keith Nixon is a British born writer of crime and historical fiction novels. Originally he trained as a chemist, but Keith is now in a senior sales role for a high-tech business. Keith currently lives with his family in the North West of England.”

As the story begins Detective Sergeant Solomon Gray has one case, an apparent drowning of an immigrant sneaking into England, that quickly turns into a search for a murderer with three bodies involved. As the investigation progresses, DS Gray finds a connection to another crime from ten years previous.

However, if you read Dig Two Graves, the first of the Solomon Gray novels, you’ll already know that Gray’s most important case is to find out what happened to his son Tom. Is it possible some of the people involved in the other cases might help Solomon find Tom?

Burn the Evidence is an engaging, intense read with twists, turns, and connections between the different cases that aren’t what you’re expecting.

While the second book in the Solomon Gray series, this could be read as a standalone. The most critical things to know from the first book are explained enough to follow in this volume.