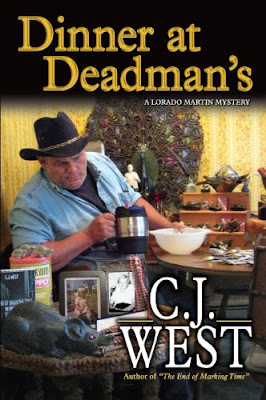 “Lorado Martin has loved junk since his grandparents took him bottle digging in the backwoods of New England when he was a boy. The search for antiques and collectibles led him to a unique hobby: digging through the estates of the newly deceased, arranging the sale of goods for the heirs, and keeping the leftovers for himself.

To make a living, he builds and maintains housing for recovering addicts and along the way he’s employed a number of his clients. The men wrestle with the siren call of drugs and teach Lorado about the difficult struggle to stay clean one day at a time.

When these two worlds come together, Lorado learns that not every elderly person dies of natural causes and that some estates are sold to benefit a killer. His latest project hits close to home. A woman he’s known since childhood haunts him from a fresh grave. Her grandson, an affable addict who has fallen off the wagon, stands to inherit a considerable sum whether he deserves it or not.”

“C.J. West is the author of seven suspense novels including The End of Marking Time and Sin and Vengeance, which was optioned into development for film by Beantown Productions, LLC (screenplay by Marla Cukor). “

Although Dinner at Deadman’s is a mystery, with all the components of a good one — plenty of viable suspects and a storyline that keeps you guessing as the clues are uncovered — what stood out for me were the characters. All of them are, in a word, characters. The major characters all have their own unique personalities and quirks that shine through and make them real. It appears that this might be the first of a series and, if my guess is right, it bodes well.

The protagonist, Lorado Martin, might be the quirkiest of them all. Lorado is a mountain of a man (which is a nice way of saying he’s both tall and could stand to lose a few pounds) who everyone recognizes from his trademark cowboy hat which wouldn’t set him apart in Fort Worth, but sure does in New Bedford, Massachusetts.

Reading Dinner at Deadman’s on the heels of a contentious political season in the U.S. in which I spent way too much time pigeonholing everyone as liberal or conservative, Lorado seemed to be suffering from bipolar political disorder. His major source of income — refurbishing rundown buildings in marginal areas of town, financed by government grants, which are used for subsidized public housing, halfway houses, and other services for society’s downtrodden — shows his do-gooder liberal side. That he does this by hiring hopefully reformed drug addicts, even though that ends up making him less money, only reinforces that perception. However, his more conservative side views his do-gooding as a lost cause, helping people who he often sees as society’s moochers and takers. This struggle within Lorado’s mind, which is something he’s well aware of, adds depth to his character and also makes him a touch unpredictable, which I think is a good thing in a mystery. Hopefully we’ll see more books with Lorado in the future.

Added for Reprise Review: Dinner at Deadman's by C.J. West was a WINNER in the Mystery category for B&P 2013 Readers' Choice Awards. Original review ran December 6, 2012.