Review: How the World Ends (Book Three) by Rudolf Kerkhoven 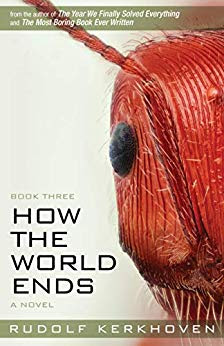 “Beginning five years after the events of Book Two, the conclusion to How the World Ends follows Caleb as he wrestles not only with his past, but with this new world, its changing climate, and the few survivors that remain.   Humanity once believed that it was made in God's image, but those who persevered are left to scavenge like insects.  Yet there might still be hope for Caleb--and if there is hope for Caleb, then there is hope for us all.”

At the beginning of the first book in this series something happens (you’ll have to read the first book for the whole story) and the vast majority of the people in the world end up dead. The story of the series revolves around the survivors figuring out how the new, changed world is different and what they need to do to survive, at least in the short term. This book picks up where the last one ended, focusing mostly on Caleb, who was only a kid when the world (more or less) ended and is now maturing. He’s presented with some issues that force him to consider his and the world’s long-term prognosis. As Caleb struggles with expectations of others that he isn’t sure he agrees with, he is forced to consider some deep philosophical questions. (The reader should find him or herself pondering along with Caleb.)

Some adult language and mild adult themes.
The third book in a series. While it could be read as a standalone, understanding what came before adds to the reader’s understanding.