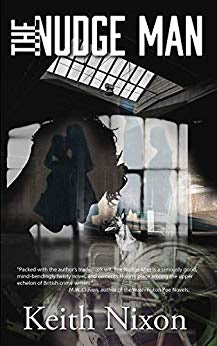 “A washed-up reporter, an escaped convict, a sociopathic gangster. All are hunting mysterious vigilante The Nudge Man…

Born again, ex-gangster, Eric Hennessey offers down on his luck reporter, Harrison Vaughan, a job. Track down the Nudge Man, a mysterious vigilante who’s stolen most of Hennessey’s money, ill-gotten gains which now Hennessey wants to use to do God’s work. Trouble is, Harry has no desire to work for a sociopathic murderer, even if he is an apparently changed man.

Harry is estranged from his family since a fabricated scandal destroyed his career. Hennessey tells Vaughan it was the Nudge Man who set him up for the fall. Find The Nudge Man and Harry has the chance for redemption and maybe even his family back.

However, Hennessey has another objective in mind. Unknown to Harry his family were taken into witness protection and had to cut ties with everyone after Harry’s son saw a murder – carried out by Eric Hennessey and he's has been looking for them ever since. Now Hennessey may have a way in – Harry himself.

And others are on the trail of the Nudge Man, including the British government and an American secret service agent. Then there’s the lawyer who offers Harry £1m to stay away from The Nudge Man. With more questions than answers and hapless guard dog Bonzo, whose bark is definitely worse than his bite, at his side Harry begins his search.

Can Harry find the Nudge Man and save his family? Or will Hennessey exact his revenge?”

“Keith Nixon is a British born writer of crime and historical fiction novels.
Originally he trained as a chemist, but Keith is now in a senior sales role for a high-tech business.

Keith currently lives with his family in the North West of England.”

At its heart this is a good mystery thriller with all the elements I’d look for, the most important being that it is intense, keeping you on edge and unsure what is going to happen. Just when you think you know what direction things are going, something changes and you realize you weren’t even close. I’ve read other books by the same author that have the same elements, British criminals and someone trying to stop them, and they’ve all been good. But The Nudge Man takes that basic blueprint and adds a few things including the US government getting involved in ways you wouldn’t expect, or at least wouldn’t have until a few years ago. These other elements add a satirical edge to the basic story as well as expanding the things I as a reader thought were possible explanations when trying to guess where the story was going. While I’ve enjoyed all of Keith Nixon’s books that I’ve read, this one is my new favorite.