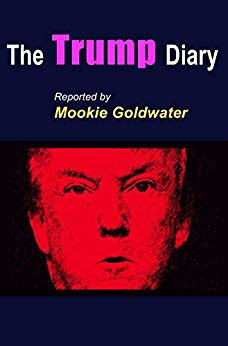 “In early June 2017, about a week before fired FBI Director James Comey testified before the Senate Sub-Committee, President Donald Trump decided to start a daily diary. He did this to keep a tally of his accomplishments and to have a truthful recounting of his administration, untouched by the FAKE NEWS Media. President Trump knew that future historians would have a keen interest. After he made an entry, he would hide the diary in his sock drawer. One morning it was gone…

Starting with a late night surreptitious phone call and a mysterious midnight dead-drop, I have come into the possession of this daily diary. After having worked in the media for the last thirty years, I now live under an assumed name and have left my job and family and move constantly, trying to dodge CIA operatives, FBI agents and guys with too many bumper stickers on their car.”

Chris Murphy is the author of one other book thus far, The Basquiat Bounce.

I don’t remember the last time I was this torn about a book review. Part of me argues for a three-star rating, but the devil on my shoulder is pushing for four stars. (Or maybe the devil is the first guy. I just don’t know.) I’ll give you both sides of the story and you can decide.

First, if you’re a fan of the current occupant of the Oval Office, you’re not likely to enjoy this book. There is no point in reading more. That leaves two groups, those who are very much not fans and those who don’t pay attention to politics and have no opinion. If you’re in the second of these groups, if you really don’t pay attention, you won’t recognize what is being satirized in the book and won’t get it. This book isn’t for you either. For the non-fans, we’ll continue.

Typically, when I see as many instances of grammar, spelling issues, and typos as I saw in this book it would automatically drop my ranking to 3 stars or less. Examples of these things are using the word “summery” instead of “summary” or using the name Stormy Davis when it was obviously referring to Stormy Daniels. Another that made me laugh was when Trump, referring to Tucker Carlson, says that America needs his “clear voice and razor sharp incite.” That’s funny because there are some who feel that Carlson does incite, even if they don’t think much of his insight. I’m inclined to think the author made that last typo on purpose, whether it was because Carlson incites people, or just because he’s read Trump’s Twitter feed and listened to his speeches and knows how seldom he creates a string of grammatically correct English. I ultimately came to the conclusion that the majority of proofreading type issues in this book were done on purpose. If I read a typo free book that claimed to be Trump’s diary, it would lose all credibility in my mind. The typos have to be there and thus, I can’t drop the rating because of typos.

This aims to be satirical and it hits the target in that regard, more or less. The Oxford Dictionary defines satire as “the use of humor, irony, exaggeration, or ridicule to expose and criticize people’s stupidity or vices, particularly in the context of contemporary politics and other topical issues.” This fits that, to a point. There is a meme I’ve seen on Facebook that says the satirical website “The Onion” is on the edge of collapse because they’ve reached the point of not being able to make up things that are more idiotic than current reality. I think there’s something to that. The ridicule and exposing of stupidity mentioned in the definition is there, but too much of it felt real and not all that humorous because it didn’t seem to be exaggerating much. But if it had exaggerated much more, it wouldn’t have seemed credible. (Much of the actual reality doesn’t even seem credible.)

However, knowing that what I was reading wasn’t true, I still found myself laughing, happy to know that what was claimed didn’t really happen, although I couldn’t rule it out happening in the near future. In a small dose, it was still entertaining. But it kept going on and on. More than 120,000 words worth. This meant the same jokes or twists kept getting repeated, over and over. What was funny the first or second time was just a drag by the time the same twist of reality had been repeated five or ten times. A book half as long would have been twice as good. My advice, if this appeals to you, read it until it gets old, then toss it in the corner for six months or a year, then pick it up again. Hopefully by then it will be old news and funny again.

See discussion in the appraisal.