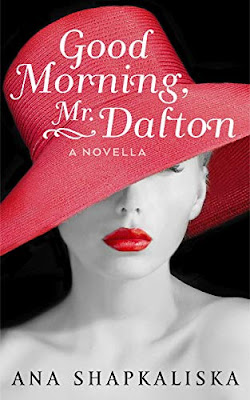 “This is a contemporary story about Dafina, an attractive woman in her forties, who works in the family car service business in Cary, North Carolina. She drives clients to and from the Raleigh airport, many of whom are business executives and socialites. That’s her daytime job. At night she works on her stories, dreams to get her breakthrough as a writer, and relocate to New York.

The relationship with her husband is not what she had hoped for when she moved from Europe. She jokes that they became like roommates and business partners. Clash of the cultures, money struggles and never ending harassment from his ex-family takes a toll on their relationship. She feels suffocated and isolated in Cary, and needs a drastic change in order to survive. When it looks like there is no way out, she meets Mr. Dalton, a unique man. He is smart, sexy, successful and married with three kids. That doesn’t stop them to fall hard for each other. He is the wind under her wings, and with him by her side she can move mountains and make all her dreams come true.”

Ana Shapkaliska is originally from Macedonia, a country in southern Europe (formerly a part of Yugoslavia). She lives with her husband in North Carolina.

This novella is the first release from this author and, at least in some regards, if you compare it to the author’s biography it appears to follow the cliché that a first novel is autobiographical, at least at a high level. The main character, Dafina, and the author are both originally from Macedonia, are married, and live in North Carolina as well as being writers. Beyond this, I’ll assume Dafina’s life is different than Ms Shapkaliska’s.

Dafina is unhappy for many reasons. As the story explains, she finds some degree of happiness along with the encouragement and support she’s lacking from her husband in the arms of Mr Dalton, one of her clients.

The version of the book I received for review was prior to release of the book, making it an advance reader copy. I don’t know if additional proofreading was going to be done to it prior to publication or not. I noticed a small number of proofing issues. If I ignore one issue, these weren’t numerous enough for me to lower the ranking I give the book. However, were it not possible that the issue had been taken care of prior to release I would have dropped the rating by one star due to an issue the author appears to have of using take instead of bring and vis versa. I noticed this issue many times throughout the book.

I can assure the author that men who are "smart, sexy, successful and married with three kids" are very far from unique. Unfortunately.