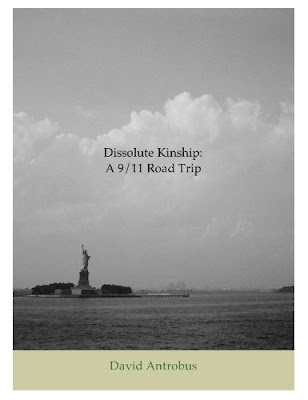 “This is what can happen when a personal story of trauma meets the collective horror of an apocalyptic, true-life event: in this case, 9/11.”

“David Antrobus was born in Manchester, England, raised in the English Midlands, and currently resides near Vancouver, Canada. He writes music reviews, articles, creative nonfiction, fiction, and poetry. The lessons he learned from working for two decades with abused and neglected street kids will never leave him.”

Until the day I die, I’ll remember what I did the night of September 10, 2001. I attended the Minneapolis stop of what was billed as the “Slewfoot Calvacade of Stars,” a tour of small Midwestern clubs by the top (really almost all) music acts on a tiny Ozark record label. It was a late night and I intended to sleep in the next morning. Then my girlfriend’s phone call woke me up. “I think you better turn on the TV,” was all she said. I turned on the TV to see a plane fly into a building for the first of several times that day. A few years later I talked to the late Duane Jarvis and Stevie Newman, frontman for the Domino Kings, both of whom had played that night. I mentioned the date and they immediately remembered where they’d been and told me about being awoken the next morning with the news that the two remaining shows on the tour were cancelled. As soon as they could, they were on the road, to Nashville and Springfield, their respective homes. Like the day Kennedy was shot, that day is cemented in the minds of all of us who lived through it.

David Antrobus remembers that morning too. He woke up in Vancouver, got in his car, and headed for New York. It was a road trip to visit friends that, as he heard and eventually saw what had happened, became much more. Recently diagnosed with PTSD (post-traumatic stress disorder), Antrobus was to see much of the same symptoms among the residents of New York. One of the ways of dealing with a stressful event is to talk about it, which he did to many New Yorkers he met, and continues doing here, telling us what he saw and felt, and how he reacted.

Dissolute Kinship packs a big emotional punch in a small number of words. I loved Antrobus’ writing style, which to me felt almost literary, but it was in the conclusions he drew where I found the biggest payoff. What do the events of 9/11 say about the world and our place in it? In Dissolute Kinship you’ll find one Canadian’s opinion and, agree or disagree, realize that the most important thing is to keep the conversation going.