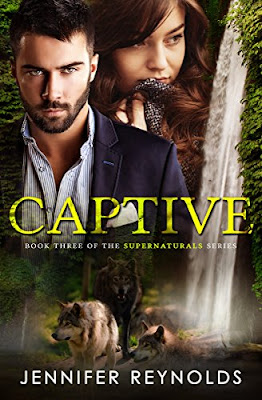 “The loss of a job, her husband, her home, and her quiet life has Talia dreaming of a life she’s only read about in paranormal romance novels.

An inherent need to find his mate and settle down has werecoyote Bane hoping that the human who’s just entered his life is the one for him.

Peace is all Casen, the king of the werewolves, wants but with half his pack yearning to be the warring pack they once were, he’s sure it won’t come in his lifetime.

Max is determined that the war between his people and the coyotes continues even if it means kidnapping and torturing a group of coyotes and the human with them to make it happen.

The Fates, on the other hand, have their own agenda for these four, and their desires are all that matter.”

She is a multi-genre author who focuses mostly on post-apocalyptic novels with plagues and zombies as their source of destruction and paranormal romances, especially shifters, weres, and ghosts. She does occasionally dabble in other genres such as general fiction, horror, and suspense thrillers.

When she’s not writing, she’s a full-time caregiver of her elderly in-laws, a stay at home wife, an avid reader, and the mother of two kitties, Lilith and Midnight.”

Talia has had a pretty rough year, losing her job, her boyfriend, and her home. She now has a job as an assistant for one of her best friends who happens to be a successful supernatural romance author, Destiny LeShae. Destiny has agreed with her publisher to help spearhead a project to help integrate the shifter world with the human world by writing some creative non-fiction pieces. The idea is all part of the supernatural community’s PR plan to ease their integration into the human world. Destiny sends Talia to gather research first hand.

This fantasy world is similar to our own and the werecoyotes are the most sociable. Since it is unlawful for Talia to be on any were-land, she needs to be escorted. Bane is assigned to Talia and his sister, Carla, is hosting Talia’s stay. Their parents are the rulers of this area’s werecoyote pack. Things are a little bumpy at first, but then goes along as planned until Talia wishes to see this magical waterfall she has heard about. The waterfall does have some sort of magical influence over Talia the others do not feel, and she is inexplicitly drawn towards the forest line, which leads to the wolf territory.

This is where the plot splits into two story arcs, the werecoyote and the werewolf. This is also where Ms. Reynolds breaks from the normal story tropes, applying her own influences to her supernatural world. The plot twists and turns as things go from bad to worse. The characters are well defined and unique. There are times when Talia wore on my nerves a bit, but she is a human thrown into unfamiliar territory with both the werecoyote and the werewolf worlds concerning the warring factions of both packs. There are plenty of blood and guts to keep the tension high. The alpha males from both packs also butt heads and growl their fair share to protect Talia.

I enjoyed the story despite Talia’s TSTL (Too Stupid To Live) moments. I do love Ms. Reynolds fresh take with her supernatural characters.

No significant issues, aside from some repetitiousness, that could be trimmed
out.

You are welcome, Ms. Reynolds. Thank you for dropping in and commenting.