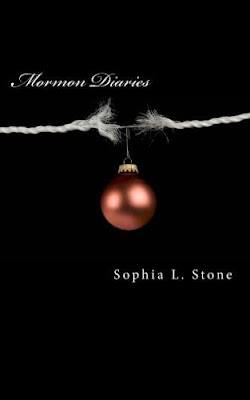 “Brought up in a religious home, Sophia believes the only way to have a forever family is by following church leaders and obediently choosing the right. She goes to the right school, marries the right man in the right place, and does the right thing by staying home to raise her children. But when she starts asking questions about grace, love, and the nature of God, she realizes her spiritual struggles could rip her family apart.”

Sophia L. Stone is describes herself as a seeker, learner, reader, and nature lover. You can follow her on twitter where she’ll happily answer your questions on Mormonism.

Although well done, my initial thought about Mormon Diaries was that its appeal would be limited to a small niche of readers, possibly just those Mormon women who have had a crisis of faith and want to know that they aren’t alone.

However, upon reflection, I realized I’d sold the book short. I remembered reading the now out-of-print Housewife to Heretic by Sonia Johnson more than twenty years ago and the impact it had on my thoughts on what it was like to be a female Mormon. I never looked at my Mother or the upbringing my sisters had in the same light again. The appeal shouldn’t be limited to women; there is something here for current or ex-Mormon men too. Even non-Mormons who are interested because they have Mormon neighbors, or anyone interested in the different faces of spirituality, would get something out of Mormon Diaries. With the focus this often-misunderstood religion is getting during the current presidential campaign in the US, there may be a lot more potential readers than I thought. Not that a large potential readership matters. That’s one of the great things about indie publishing: it gives even a book with a small potential readership a chance to find its audience.

I can’t help comparing Mormon Diaries with Housewife to Heretic (or at least my possibly faulty memories of it). Stone does an excellent job of communicating what it is like to be a Mormon, specifically a female Mormon, but does this in a way that, while pulling no punches, is also not overtly political or as likely to offend devout, yet open-minded, Mormons as Johnson’s book would have. She captures the dynamics of Mormonism and how family, friends, other church members, and leaders influence those within the faith. Whether you’re a Mormon or an ex-Mormon, wanting to compare notes, or someone who would like to understand Mormonism better, Mormon Diaries is a good place to start.