Review: The Midsummer Wife (The Heirs to Camelot Book 1) by Jacqueline Church Simonds 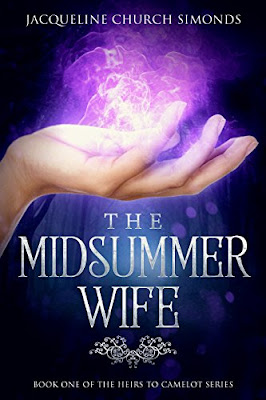 “The reincarnated souls of King Arthur, Merlin, and an anxiety-ridden priestess return to save Britain after a devastating nuclear attack, only to find an old foe: Morgaine.”

The Midsummer Wife is an imaginative, well-written urban fantasy, with a beautiful book cover, and flawed characters who must face their past and come to terms with the truth. Lord Ron Steadbye – the heir to King Arthur, and Duke Drunemeton – the heir of Merlin, who is known as The Harper. The Harper was created to keep the Arthurian tale alive and preserve the artifacts which would help prove they are who they say they are when the time of reckoning comes. The High Priestess of the Sisterhood, Ava Cerdwen, is the heir of Mother Anya. These three characters are challenged to live up to their mythical strengths to heal Britain after a nuclear blast in the heart of London.

The story takes place in the not too distant future and is mainly told through Ava the High Priestess’ eyes, who has flaws of her own to work through. She is the pivotal character who guides Ron/King Author, and Harper/Merlin. Ava will also lead the healing ceremony at the Summer Solstice with Ron and Harper by her side, along with Druid Priests to lend power to the Celtic rite to heal and cleanse the affected area. But is Ava strong enough to handle all this power? Morgaine has had 1500 years to hone her dark magic and gather power. She also has the cult of Hela tracking our three heroes who are on the attack to divert the healing ceremony that is approaching quickly.

The Midsummer Wife is enthralling, with captivating, complex characters you want to succeed. Ava, as High Priestess, is also charged with bringing about a new world order featuring spirituality at its core.

I was disappointed in the cliffhanger ending, it’s a cheap way to hook the reader to want to read the next book in the series. I think the story and characters are strong enough for readers to want to continue without tricks or a cliffhanger. I was further soured by the way this book ended. Morgaine is a thoroughly evil character, which I admit every story needs. I just hope our heroes are not so blinded by their success as to not see the truth.

If you love Arthurian tales with strong characters and a captivating plot, this is a good one where the story continues into the future. And did I mention the eye-catching book cover? Sometimes it’s okay to judge a book by its cover.

The Midsummer Wife is book one in Jacqueline Church Simonds’, THE HEIRS OF CAMELOT series. Adult language—numerous F-bombs, and adult situations—where sex is NOT behind closed doors. If you are sensitive to either of these, this book may not be for you. There is also one whopper of a cliffhanger.