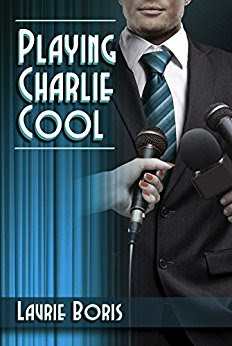 “With a few humble words, mayoral staffer Joshua Goldberg comes out to the New York press, resigns his post, and leaves his wife. Three months later, he is still skittish about making his relationship with television producer Charlie Trager public.

Charlie understands Joshua’s stress over the divorce and his desire to step back into the political spotlight. But he’s tired of schedule conflicts and frustrated about getting put on the back burner while the pressure ravages the man he loves. Managing some of the most demanding divas in network television has taught Charlie patience. But his cool facade is wearing thin.

Longing to ease Joshua’s anguish and burning for control in a situation that seems headed off the rails, Charlie takes a huge risk that could destroy everything he and Joshua have worked so hard to build.”

The author of five other novels, Laurie Boris is a freelance writer, editor, and proofreader as well as a regular contributor to Indies Unlimited. Her book Sliding Past Vertical was the winner in the Contemporary Fiction category of BigAl’s Books and Pals 2014 Readers’ Choice Awards. Laurie lives with her husband in upstate New York.

I was confused when I saw this book was being billed as the third book in the author’s “Trager Family Secrets” series. I knew it was the same characters and was essentially a sequel to The Picture of Cool, which is billed as book one. Had I missed one of Boris’ books? With a little investigation I found that Don’t Tell Anyone, which came out first, is sequenced as second in the series. Somehow I’d never registered that Charlie, star of book one and three, was the gay brother-in-law of Liza, the protagonist in book two. Not even when Liza and her husband made appearances in the other two books. I guess we all have airhead moments.

It is clear that the character of Charlie had a lot more story for Boris to tell. What surprises me (although it really shouldn’t) is despite the many surface differences between Charlie and me (he’s gay, lives in a big city, is a “creative type,” and much more social), I have no problem relating to his experiences. That’s one of the things I’ve found, and keep getting reminded of, when reading books with main characters whose life is much different than my own. They remind me that the human experience is much the same for everyone, with many of the same goals, frustrations, and struggles to find the balance between our own needs and those we care about.

Although part of a series, reading book two is not a prerequisite to understanding what is happening in this book. However, while not an absolute requirement, I’d advise reading The Picture of Cool before this installment.

Although my review is based on a beta version of the book and I can’t judge the final product in this area, that version had no significant editing or proofing issues.

Thank you for the reprise!

I missed this the fist time around, so am glad to make its acquaintance now.

Thanks for the comments, Laurie and Judi.

Judi, that's why we do the reprises. It brings the better books we've reviewed to the attention of new Books and Pals readers or long-time readers like yourself who missed them the first time around.