Reprise Review: They Call Me Crazy by Kelly Stone Gamble 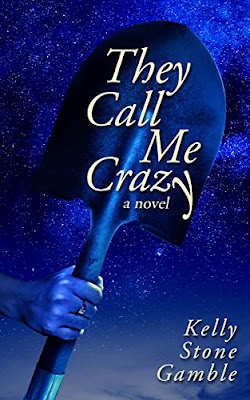 “Cass Adams is crazy, and everyone in Deacon, Kansas, knows it. But when her good-for-nothing husband, Roland, goes missing, no one suspects that Cass buried him in their unfinished koi pond. Too bad he doesn’t stay there for long. Cass gets arrested on the banks of the Spring River for dumping his corpse after heavy rain partially unearths it.

The police chief wants a quick verdict—he’s running for sheriff and has no time for crazy talk. But like Roland’s corpse, secrets start to surface, and they bring more to light than anybody expected. Everyone in Cass’s life thinks they know her—her psychic grandmother, her promiscuous ex-best friend, her worm-farming brother-in-law, and maybe even her local ghost. But after years of separate silences, no one knows the whole truth. Except Roland. And he’s not talking.”

“Kelly Stone Gamble was born and raised in the Midwest… all over the Midwest. By the time she graduated from high school, she had run away from home twice and attended twenty-two different schools.”

There was a lot of dark humor in this twisted tale that could have taken place in any small town. The story exposes some serious issues of mental illnesses being improperly medicated by doctors who treat beyond their expertise. Cass lived her days in a fog and the best decision she ever made was dumping her pills down the toilet on that fateful day. Crazy ran in her family. When Cass was five, her mother committed suicide. Cass and her nine-year-old sister, Lola, were left in the care of their grandparents. Their grandma Babe was known for making potions, reading auras, and told fortunes with tarot cards. She was considered the town witch.

This story is told through multiple points of view that are clearly marked in each chapter heading. Each character rang true as they told us their perspective of the events as they unfolded. I could feel the sheriff’s frustration, and had to giggle as Cass’s big city lawyer put his spin on the situation. Small town secrets always have a way of coming to light, much to Maryanne’s dismay. The local fifth grade teacher has several secrets of her own and is expertly woven into Cass’s, Roland’s, and Clay’s lives. Clay was Roland’s older brother who after being discharged from the army after two years’ service, now spends his time with his worm farm when not working at the local hardware store. To say this town has colorful residents is an understatement.

I found this an entertaining read that pulled me in and kept me reading till my eyes wouldn’t stay open any longer. The setting of this book happens to be relatively close to where I live, so I could identify with the people, the problems that they dealt with, and situations that arose a little too easily. I appreciated the fact that Cass attempts to take full responsibility for herself instead of playing the crazy card and she doesn’t see herself as a victim. This was a well told story that left me with a smile on my face.

Added for Reprise Review: They Call Me Crazy was the winner in the Contemporary Fiction category for B&P 2015 Readers' Choice Awards. Original review ran February 11, 2015.

Even though I read an advanced readers copy and normally don’t comment on editing or formatting issues, I came across no issues to note.