Review: Sons of Light and Darkness: A Mestoph and Leviticus Fiasco by Adam Ingle 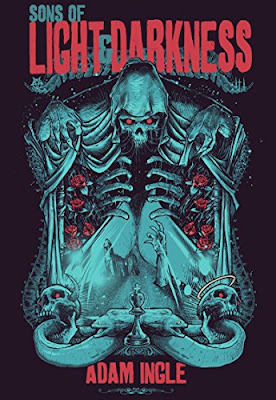 “When the demon Mestoph—an agent for Hell Industries—stumbles upon a cult of forgotten angels and demons called the Sons of Light and Darkness, he takes it upon himself to uncover the secret of these long-lost outcasts. What he discovers is much more than he was looking for: not just secrets of the war between Heaven and Hell, but the Sons' plan to raise a god of their own to exact revenge against God and Satan. Sensing an opportunity to use the Sons to his advantage, Mestoph convinces his angelic best friend Leviticus—a cubical-dweller at Heaven, Inc.—to join him in his latest ill-conceived scheme to profit at the expense of their masters. With the aid of New Orleans Voodoo, South American shapeshifters, and African gods the two unlikely friends conspire to escape their eternal servitude to the politics of Heaven and Hell. But will their plans crash and burn, or earn them a permanent vacation with a poolside view of the apocalypse, sipping Mai Tais and watching as the skies burn and gods fall?”

“Adam Ingle is a basement-dwelling, graveyard-shift nerd by night and an aspiring peddler of exorcised creative demons by day. He and his chinchilla live in a tin can on the side of the interstate somewhere in South Carolina.”
Necessary Evil and the Greater Good is his first novel in A Mestoph and Leviticus Fiasco series. There is also a short story, Of Popes and Pentagrams: A Mestoph and Leviticus Mini-Fiasco available.

Mestoph and Leviticus have both been on probation after starting Ragnarok in the first book, Necessary Evil and the Greater Good, two years ago. Sons of Light and Darkness starts with Mestoph remembering his favorite bedtime story of The Fall, when Lucifer challenged God. This history sets up the premise of the story. At the end of the tale Mestoph begins to wonder what may have happened to the angels and demons who survived the fall but were abandoned on earth. Surely there were survivors who may have hidden to avoid destruction by God or Satan. Mestoph, forever a schemer, deduces from some old omens that there are survivors known as the Sons of Light and Darkness holed up in South America.

Razerak, a fallen angel, gathered the stragglers – angels and demons alike – to build his army, and has a plan to reap revenge against God and Satan. It’s an ingenious plan that is gaining strength every day. To God’s dismay, Mestoph and Leviticus have become unwitting pawns in a prophecy they know very little about.

Joining forces with their old advisory Saint Peter, who has been relegated to earth for his part in Ragnarok, Mestoph and Leviticus head off half-cocked to search old Incan temples hidden in the South American jungle. What they discover is far more than they can handle on their own. The plot becomes complicated as more information becomes known and sends our crusaders on twisted paths to figure out how to save not only the domains of Heaven and Hell, but the lives of God and Satan.

Mr. Ingles has done a fantastic job weaving mythology and religion into a quest that proves a demon with a shred of humanity can’t catch a lucky break to save his life. This tale is full of humor and violent graphic battles where you are left pulling for the underdogs once again. Even though this is the second installment of A Mestoph and Leviticus Fiasco, I think the author gives you enough information that Sons of Light and Darkness can be read as a standalone. Then I assure you that you will want to go and read Evil and the Greater Good just for the fun of it.

Sons of Light and Darkness is the second installment in A Mestoph and Leviticus Fiasco series but can be enjoyed as a standalone. Vulgar adult language with several F-bombs.