Review: Love, Christmas - Holiday stories that will put a song in your heart! By Joan Reeves, Mona Risk, and Denise Devine

Editor's note:  We continue with part six of our multi-part review of this box set. 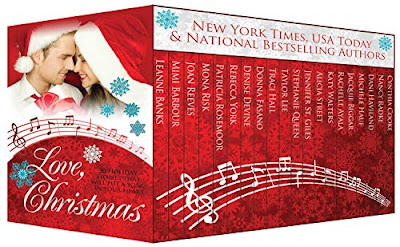 Last Christmas by Joan Reeves - Annabelle gave him her heart, but Rick threw it away. He wants redemption, she wants revenge.

Holly Jolly Christmas by Mona Risk - Pregnant at 18. Adoption would save the baby's future but may cost her the man she loves.

So This is Christmas by Denise Devine - He was her child nemesis, now he's her best friend forever.

“JOAN REEVES is a NY Times and USA Today bestselling author of Contemporary Romance. She began her career with New York traditional publishers. When the Amazon Kindle came along, she happily embraced a new career path as an independent author/publisher.

Mona Risk: “New York Times and USA Today Bestselling Author, Mona Risk, received an Outstanding Achiever Award from Affaire de Coeur Magazine. She's a two time winner of Best Contemporary Romance of the Year from Readers Favorite; a winner of Best Romance Novel of the Year from Preditors & Editors Readers Poll; and an EPIC Award finalist… She writes contemporary romances, medical romance, romantic suspense, and paranormal fantasy. Sprinkled with a good dose of humor, her stories are set in the fascinating places she visited or more simply at home.”

Denise Devine, a USA Today bestselling author of contemporary romance, romantic comedy, and inspirational romance. She’s been passionate about books ever since she learned to read. Ms. Devine loves animals of all kinds and always includes them in each story.

In this group of novellas from Love, Christmas I am reviewing more new-to-me authors. I chose stories that sounded like they had a common theme: facing personal dilemmas.

At eighteen, Heather Ramsay finds herself pregnant. She vows to not let the baby ruin Jeff’s scholarship to MIT this coming fall. Heather decides this pregnancy would best be handled by putting the baby up for adoption. That way the baby wouldn’t disrupt anyone’s life but her own, right? Silly, naïve teenager. I have to confess, I am not the ideal reader for this story having lived through this from a mother’s perspective. Although, our circumstances were vastly different. A box set like this is a great deal for the money, but with a wide variety of authors and sub-genres you may find that some don't work for you. Holly Jolly Christmas is an example of one that wasn’t for me.

Since Heather’s mother is rightly distracted by her dad’s serious diagnoses and cancer treatments, Heather confides in her older sister. Madelyn has graduated from medical school and offers sound advice while trying to support her younger sister. Ms. Risk does a good job representing both Heather’s views and thoughts as well as Jeff’s with alternating points-of-view. Jeff shows his maturity by trying to keep a level head, even though there are times he loses his self-control. The twists in the story keeps emotions at a high level throughout. Holly Jolly Christmas is a sweet, but heart rending, story that explores many aspects of the situations at hand.

So This is Christmas by Denise Devine:

Annabelle Lee is looking forward to some alone time before an annual girl’s weekend at her friend’s family cabin at Breezy Point, Minnesota. She arrives the Monday before the planned weekend to do some soul-searching, but finds the cabin inhabited by Christopher Stone, her best friend’s twin brother, who isn’t planning to leave until Friday.

So This Christmas is told from Annabelle’s first-person point-of-view. She has managed to build a successful photography business, however, she has recently experienced an emptiness from a lack of a relationship she hasn’t had the time or energy to pursue. So she was here early to reassess her priorities alone. How can she manage to do that with her childhood nemesis around?

This is a sweet story about relationships that are not always as they seem. It’s how you choose to look at things that defines them. The lesson is to get over yourself. Annabelle’s journey was a pleasant trip to watch unfold. I would recommend this story if you need to unwind and relax.

The stories in Love, Christmas are new and never before published. They are also classified as Clean and Wholesome stories.
Last Christmas by Joan Reeves, contains adult sexual content and a few F-bombs.

Last Christmas by Joan Reeves: Just one significant issue, which I mentioned in the body of my review. My other issue was small, a sentence with extra words.

So This is Christmas by Denise Devine: No significant issues

Rating: So This is Christmas by Denise Devine: **** Four Stars

Thank you for the great reviews! As always, very thoughtful and thorough.
SQ

Thank you for all the time you've given to this set, we all appreciate it very much!

Thanks for dropping in and commenting, Stephanie.

Thanks, Ms. Biggar, this has been quite an undertaking. I have enjoyed reading this boxed set.

Thank you for reviewing LAST CHRISTMAS. I'm delighted you liked the story even though I'm embarrassed about the Eddy/Eddie faux pas. I had 3 proofreaders on this project so that shouldn't have happened. I'm happy that didn't take away from your enjoyment of the story.

Reviewing all these stories is quite an undertaking so I really want to thank you for your time and effort.

Thank you for stopping in and commenting, Ms. Reeves. It's amazing how those buggers slip by at times. I have to say, reviewing this set of novellas has been an experience. :)