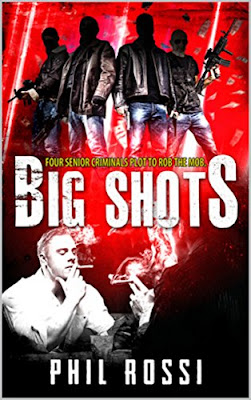 “When washed-up mobster Mickey Fingers returns from prison, he's shunned by the crime family he took the fall for. Fingers retaliates by forming a crew of over-the-hill criminals to sack the mob's cash depot.”

A New Jersey based author and filmmaker, Phil Rossi has three other short-ish works (novella/novelette size) for your kindle. Read more about him on his website.

A mobster is released from prison after taking the fall for the mob bosses and finds they no longer have any use for him, so he recruits some fellow over-the-hill crooks to rip them off. It's a good premise and to a point, a good story. However, I found myself tripping over the occaisional typo (not that many, but too many for a work this short) or stumbling on writing that felt like it needed a bit more polish. For example:

Sam, still out of it, didn’t respond, even as Fingers patted him down. Fingers stuck his free hand inside Sam’s jacket and pulled out the infamous Glock. Fingers stepped over Sam, en-route to search for the money. Fingers checked the room, pad tossing in full tilt. Closets, couch, and chair cushions. Fingers lifted the mattress, discovering the loot from the robbery. The cash bricks, lined the box spring. Fingers knelt down, as if he found a pharaoh’s tomb. Now were talkin’!

In case you're uncertain, Fingers was involved in that scene. There were good parts and bad parts that averaged out to lukewarm overall.

Quite a few proofing errors for a work this short.


Reviewed by: BigAl
Rating: *** Three Stars
Posted by BooksAndPals at 8:00 AM