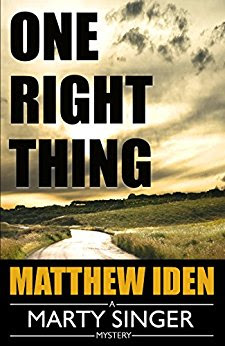 “Retired DC Homicide detective Marty Singer is driving through rural Virginia when he sees a billboard by the side of the road with the picture of a man and a simple, stunning question:

Because Marty's got his own history with the man on the sign...and he needs to find out who murdered J.D. Hope and why if he wants to do One Right Thing.”

Currently a resident of Northern Virginia, Matthew Iden has lived, worked, and studied around the world. You’ll find lots of short stories and books on his author central page at Amazon including the (so far) five book Marty Singer Mystery series. The first of these, A Reason to Live, was a nominee in the mystery category of the 2014 Books and Pals Readers’ Choice awards.

I loved the first two Marty Singer mysteries and this one, the third in the series, continues the streak. Part of the appeal is the twist on the genre, since technically Marty is no longer a policeman. He doesn’t have to operate under the same constraints. He doesn’t have the same readily available resources. Yet, in his heart, he’s still a cop and the series still feels like a police procedural.

I also like Marty for the kind of person he is, approaching his vocation turned avocation to protect and serve, wanting to see justice done. In this particular case the main thing motivating Marty is, as the title implies, a desire to do the right thing. Marty has a history with the murder victim and is driven to find his murderer to make up for a feeling that he fell short in his duties to him in the past.

I also like author Iden’s ability to string words together in a way that doesn’t feel like he’s trying too hard, yet sometimes stops me short with their subtle, yet evocative way of describing something. One example is this description of a house.

I stopped in front of a white-sided Queen Anne–style home on the corner of Beal and Market. It was a sprawling pile, with wraparound porch, octagonal tower, and meticulously carved gingerbread under the eaves. The knobs, pilasters, dentils, and other features that I’m sure an architect would have a word for were painted a slate blue with salmon trim, giving the whole thing a slightly silly, fairy-tale cast.

If you’re a fan of police procedurals or mysteries, One Right Thing (really the entire Marty Singer Mystery series) is well worth your time.

Although part of a series, this book can be read as a standalone. Or, if you’d prefer to read in order, the first book of the series, A Reason to Live, is free indefinitely for your eReader from most major retailers.

Added for Reprise Review: One Right Thing was a nominee in the Mystery category for B&P 2015 Readers' Choice Awards. Original review ran September 12, 2014. Was signed to Amazon's Thomas & Mercer publishing imprint and republished in December, 2014.

These are very good books. Haven't read this one yet, but have high expectations!