Review: The Outcasts: City in Ruins by K.C. Gray 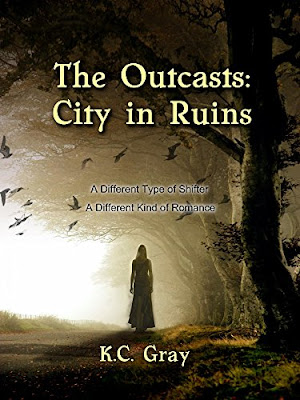 “When fifteen-year-old Sophia Goodman meets Billy Carter and touches his hand, her very essence hums with pleasure. Sophia is so addicted to his touch she ignores Billy's strange behavior. It's obvious he's hiding something, but by the time she realizes Billy isn't as he seems, she finds herself thrust into a world filled with magic and mythological creatures.”

“K.C. Gray holds a Master of Fine Arts from Eastern Kentucky University.
She was born and raised in Hopkinsville, KY. Currently, she lives in a land of fantasy and only pokes her head back into reality to share her experiences with others.”

To learn more about Ms. Gray you may visit her website or Facebookpage.

Sophia Goodman is an angst-ridden fifteen-year-old girl who finds solace in a special place deep in the woods behind her house. One day she meets a mysterious young man there about her same age. They seem to have a few things in common and when he touches her she is overcome with a feeling of peace. Mesmerized by Billy Carter’s touch they start meeting in her special place nightly.

Then Billy gets impatient and starts manipulating Sophia. That is where the story lost me. Billy has big secrets. The world he lives in is well developed and described. The characters are diverse and their dialogue fits the story well. I just couldn’t get invested in Sophia or Billy. Especially when Sophia turns out to be just as selfish and manipulative as Billy. I could find no integrity to grasp hold of.

Bottom line is I don’t think this book was for me. Other than the numerous proofing issues the story has a nice flow. It’s about a harsh world with a detailed history, a rigid ruler with a manipulative wife, and a prophecy. This prophecy may or may not include Sophia if she has any say in the future.

I came across several minor proofing errors such as missing, extra, or wrong words.