Review: S is for Serial by D K Greene 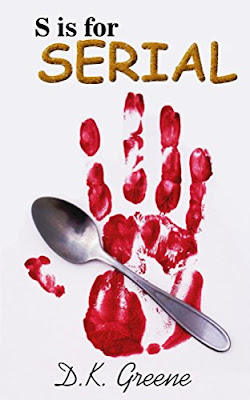 Description:
"Peter has spent a lifetime trying to forget who he is. After decades of running away from his father's murderous past, Peter has finally settled into his Witness Protection identity. He has a job, a girlfriend and the normal life he's always dreamed of. All of that is put in jeopardy when Inspector Douglas comes looking for help uncovering more bodies.

Given the task of reconnecting with his murderous father to gain valuable information in unsolved cases, Peter must decide if he has the stomach to be the hero that the lost victims deserve. When his well intentioned therapist and Inspector Douglas push him to dig deeper into the case, Peter is faced with the realities that some family ties are simply too much to bear.

A witty tale that tromps through the countryside of the Pacific Northwest, author D. K. Greene delights in this newest addition to Serial Murder lore."

"Favourite books: Heartsick, Evil at Heart, Night Season, Kill You Twice by Chelsea Cain. The Martian by Andy Weir. Until The End Of The World series by Sarah Lyons Fleming. I love to read, research and write. When I'm not enjoying books, I also knit socks, bake bread and watch Game of Thrones in bursts. I love the outdoors and am enjoying learning about farming."

Appraisal:
The premise of this book is credible and engaging. A serial killer, Ollie Roberts, promises to lead the authorities to where bodies are buried if his son, Peter Wilson, (an assumed name on the witness programme) is allowed to work with him. Inspector Douglas, (Dougy) who arrested the killer and knows him well, talks Peter into engaging with his father again - for the sake of the families who want to find their loved ones. Peter, whose life is quiet and settled now, is reluctant but eventually agrees to do this.
The day comes when he accompanies his father, and Dougy, (and several other policemen) to the woods. Ollie tells him he should murder someone himself so they could better understand each other and when Peter says he has never wanted to kill anyone, Ollie says:
“Good Lord, son. Maybe you ought to talk to someone about that
There is a lot of black humour in this book which makes the reader laugh even though the subject matter is horrible and not funny at all. And some parts are just plain funny:
" . . . a swooping haircut that makes me wonder where his hair actually begins and ends. He flips his head to the side as if he's about to have a seizure but then I realize he's just trying to get the wild hair out of his eyes . . . "
We realise very quickly that Peter is a strange man; he has an odd relationship with his girlfriend, Elsie and definitely gets more out of sex when he's on his own. Although he has a home and a job he is not as settled as you might think. He goes to Jeanne for psychotherapy but rarely tells her the truth; he likes going to see her because he fancies her and thinks she fancies him.
Ollie is a bully, manipulative but charming and Peter finds it hard not to fall under his spell again. Dougy, the policeman, seems to be a warm, loving person, perhaps too fond of his prisoner but believable all the same.
This is a very well written book; the narrative is compelling and moves along swiftly and the dialogue is terrific.
However, the entire book is marred by the unrealistic ending. It is so puzzling that it seems to make a nonsense of the premise itself, and indeed, of the whole story. I had planned to give it five stars as it is so very, very good but because of the ending I am deducting one star.
Buy now from:            Amazon US        Amazon UK
FYI: