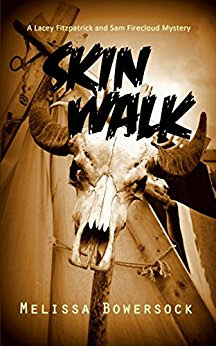 “Lacey and Sam are on the job again. This time, the ex-cop and the Navajo medium have been called out to the Navajo reservation to investigate the suspicious death of Sam’s cousin. What they uncover leads them into a realm of the supernatural beyond anything Lacey ever imagined; her years on the LAPD did nothing to prepare her for dealing with witches and shapeshifters. With clues few and far between, can they determine who the murderer is before they themselves become the target of deadly curses and feral shapeshifter beasts?”

Author:
“Melissa Bowersock is an eclectic, award-winning author who writes in a variety of fiction and non-fiction genres: biography, contemporary, western, action, romance, fantasy, paranormal and spiritual. She has been both traditionally and independently published and is a regular contributor to the superblog Indies Unlimited. She lives in a small community in northern Arizona with her husband and an Airedale terrier. She also writes under the pen name Amber Flame.”

Lacey seems to be settling in to her new profession as a private investigator. However she misses bouncing ideas and thoughts off Sam. So, when Sam calls and asks if she is interested in going to Arizona with him to investigate his cousin’s suspicious death on the Navajo reservation, she jumps at the chance. Lacey has no idea what she has gotten herself into and tries to rely on her police training. She quickly learns that things that happen on the reservation stay on the reservation. When she is faced with accepting Navajo mysticism she is unnerved and almost frantic trying to come to terms with Navajo reality and the white world reality in which she was raised. She knows she is out of her element and must defer to Sam.

However, she is not willing to let her police training go by the wayside and defies Sam. If she learns her efforts are for naught, then there is no reason for Sam to ever know… The problem is clues are scarce and getting natives to speak about their case is tricky. After saying that, I have to say that I love the mutual respect these two have for each other. I know it sounds like I’m contradicting myself, but their actions and dialogue are realistic, honest, and convincing.

I was surprised at the amount of Navajo lifestyle and beliefs that were revealed in Skin Walk. Sam’s grandfather, Ben, is a treasure. He lives alone in a traditional Hogan away from the family. At Ben’s fire pit, Lacey learns about the name Firecloud. It’s a touching scene full of feels. Since Ben speaks primarily Navajo, it’s thoughtful of Sam to translate for Lacey so she stays in the loop. It was also nice to meet Sam’s brother, Gabe, his wife, Roxanne, their two sons, Carson – twelve, and Griff - ten. Since Sam and Lacey are staying in their house, we get to see what a modern Navajos’ family life is like. This also gave Sam and Lacey the opportunity to bounce ideas and scenarios around about the crime.

There are many twists to the plot, some I found harrowing and fascinating at the same time. Being familiar with Native American traditions and stories I had no problem buying into the premise. That does not mean I am comfortable with the paranormal factor. Even Sam, with his abilities, would admit this experience tested his limits. I also found this an emotional tale about family, cultural diversity, loyalty, and human values. I sure hope Ms. Bowersock has more story ideas for Sam Firecloud and Lacey Fitzpatrick. I’m loving this series.

Skin Walk is the second book in A Lacey Fitzpatrick and Sam Firecloud Mystery series. The first book is titled Ghost Walk.