Review: A Company of Roses by Megan Goodenough 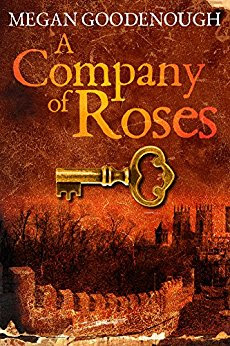 This is a treasure hunt in the ‘history and mystery’ genre. Cas is sidekick to charismatic, beautiful Lacey. Lacey goes missing, leaving behind a trail of destruction and a set of enigmatic clues to an Elizabethan treasure. Cas will have to find a courage and resourcefulness she's never known before if she's going to find the treasure and, with it, save her friend.

Cas races across Brighton, London and some stunning English landscape (you could follow her progress on a map) searching for and solving Lacey’s clues. The clues include appearances from Mary Shelley, Ada Lovelace, Queen Elizabeth I and other strong women from British history with whom you may be less familiar.

The end of the journey is more personal than Cas could have imagined as she finally unearths the British Government’s most well-kept secret, and faces the organisation sworn to protect it.

Megan Goodenough is a British author, a graduate of York University with a degree in archaeology. She’s been short-listed for the Crime Writers’ Association Debut Dagger Award, long-listed for the TS Eliot Award and won competitions with BBC Writers Room. This is her first novel.

I enjoyed this a lot – to the point where I couldn’t put it down. If you like historical mysteries this will appeal to you. If you enjoy Dan Brown’s clever clues (especially if you find the violent deaths and severed body parts in his books a tad superfluous) you will enjoy this. As you can see above, Goodenough’s expertise is in areas which feed the creation of this sort of novel. Readers familiar with the British Tudor dynasty will be aware that Tudor works of art were chockful of symbols. Her research (even – or perhaps particularly – if it has led to imaginary artefacts) is first class yet her learning is placed lightly on the page. Goodenough draws strong, engaging female characters. She leavens the book’s action with wit and humour, and even permits her characters some introspection when time serves. The result is a real page-turner.

The book is set in the present. The two female protagonists are young, talented artists. Cas is drifting through her life, intending to get a grip on it soon. Or maybe not. Then suddenly she has to shape up much more quickly than she intended. So, the book is as much a rite of passage as it is a thriller.

Cas and Lacey are delightfully believable. I have had a relationship like that. I have had that revelation about it. Cas’s vacillation about Reuben (the single major male character) also rings true. How Cas handles a gun made me think the author picked one up for the first time as research for this book and put the experience accurately on the page. Cas’s dead gran is beautifully drawn: a character from beyond the grave, but none the less potent for that.

Up until the end I thought that the prologue was an unnecessary give away. It isn’t, it’s a clue. The motivation for finding that which is lost changes two-thirds of the way through. At first I thought it was wobbly plotting. It isn’t, it’s a change of motivation which shows the heroine (for she is more than a protagonist) becoming a finer human being.

For readers in the US (which is most of you, I think) brace yourself for British spellings. But as a quid pro quo you get descriptions of British places that only a Briton in love with them could provide. The Great Court at the British Museum is the standout example (it is stunning and she does it justice: trust me, I’ve been many times) and there are a number of others.

If the book has a flaw, it is that some of the information fed to the reader at the beginning of the book isn’t very helpful until one reaches the end. Which could also be a good reason to read it again.

There was a susurration of little typos in the file I read. Hopefully these have been hunted down and eradicated in the published versions.

Thanks for dropping in and commenting, Maria.