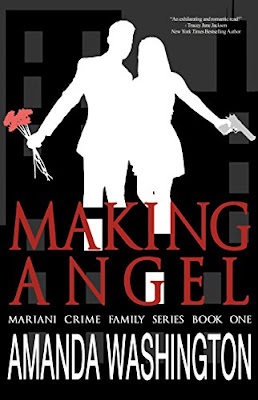 "Heir to a powerful Las Vegas crime family, D’Angelo Mariani’s survival depends on his ability to prove his value to his father. Forced out of the technology lab and into the underworld, Angel is on the brink of pulling off the impossible when he runs into a captivating humanitarian who changes everything.

Markie Davis is all about compassion, service, and the ultimate adrenaline rush. After a year-long stint volunteering in an African orphanage, she’s in Vegas to check up on her wayward little sister. Markie never anticipated meeting someone like Angel.

Everyone knows Angel's family is dangerous, but the secrets Markie's been keeping might just be fatal… "

"Amanda Washington first put her dreams to paper in 1999. Making Angel is the first book in her new adult mafia fiction series, but she's also written dystopian and young adult novels. When she's not writing, she's busy living out her real adventure in southwest Washington with her husband and their five boys." For more information visit Amazon's Amanda Washington Page.

This is a hybrid of a novel. From the description, and the beginning of the book, a reader would expect a story about a mafia family with a love story thrown in but in fact it is a love story with a mafia family thrown in. The lovers are Angel Mariani and Markie (known simply as Markie). Angel is the son of a powerful mafia leader, expected to follow his father into the family business but Angel is only interested in technology. His life is complicated by the fact that he would do almost anything to please his father.

Angel dislikes and disagrees with violence but even so, he does what he has to do to carry out his father's wishes. His constant companion is called "Bones", his best friend since childhood but also his bodyguard. They meet Markie in the airport where she is waiting for her sister to pick her up. She is just back from working in an orphanage in Zambia. Bones suspects Markie of having a secret and is worried about his friend's attraction to her.

I like the way the book is written in sections; some from Angel's point of view and some from Markie's.

There was something different about Markie, though. Her dimples. Her perfect lips. The innocence in her bright blue eyes . . . Her long blonde curls cascaded down her back and, as she slipped a rogue lock behind her ear . . .

However, this description would appear to make her ordinary, not different at all; it's a description of a doll. The same goes for Angel himself. Markie thinks:

Barely older than me, he worked the sexy Italian look like a movie star. His tailored suit might as well have had moneybags taped to it . . .

This makes both of them stereotypes of the romantic novel.

Bones, Angel's bodyguard is an interesting character - loyal, devoted and loving yet not in an inferior way; he is a complete, clever, competent person and fun to read about.

The narrative doesn't quite flow but is more like a series of set pieces or scenes, like the game with the children, the journey to San Diego, or being on the High Roller. However the writing is good and the dialogue natural and believable. The pace and shape of the book are very good as well, and it has been well edited and proofed.

The prologue isn't necessary and is too short in any case.

The last quarter of the book is both melodramatic and improbable and, in fact, might be morally questionable.

The story as a whole is slow and gentle and should be enjoyed by readers who like a little mystery with their romance.