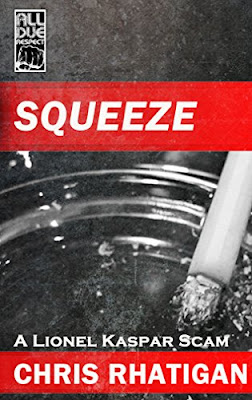 Lionel Kaspar, a hard-drinking gambler, parlays a bit of luck to move from a dead end clerical job into a slightly higher paying position as a reporter on a local newspaper. He quickly finds ways to scam his editor into a pay raise and blackmail his old boss. The minor monetary success is built on ground more treacherous than Kaspar imagined.

“Chris Rhatigan is the co-publisher of crime fiction syndicate All Due Respect Books. He is the author of The Kind of Friends Who Murder Each Other, Squeeze, and Race to the Bottom. He lives in Mussoorie, India.”

Squeeze captured this reader like the last hardwood roller coaster on the eastern seaboard. A glance at nostalgia, a coin for a ticket and before you can “thank you sir” you’re hurtling out over gray-green breakers that look a lot more ominous than they did from shore. But no exit or respite until you reach the end.

Rhatigan writes with dark humor and a feel for characters devoid of redeeming virtues, great fun for us with twisted psyches or for us seeking escape from stupefyingly normal psyches.

The hero Kaspar is a delightful sociopath so involved in working out the next cheap scam or twenty dollar sports bet that he can’t see where his focus on beer money is leading him. The people he bruises along the way are similarly low on the evolutionary scale of human morals. Little harm, little foul until a reporter from a rival newspaper applies his life-wrecking expertise to Kaspar.

The rival squeezes too hard and Kaspar lacks the wit to act in any way other than a cornered rat--he bites.

My only disappointment was a rather thin plot and an ending more suited to a short story than a novella. Hints of intrigue or subplots were left unexplored as Kaspar stumbled his way toward an inexorable and easily anticipated conclusion.