Review: Maggie in the Dark: Transcendence Book 1 by Lynne Cantwell 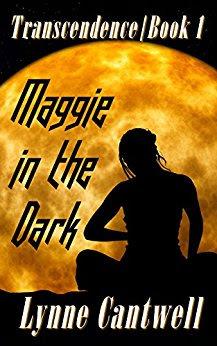 Decades ago, Maggie Brandt fled the East Coast – leaving behind her troubled marriage, her three nearly-grown children, and her controlling mother-in-law – and picked up the threads of her old life in her Midwestern hometown. There, she found a measure of peace, even as she regretted leaving her children behind.

Now, though, her ex-mother-in-law has been diagnosed with uterine cancer, and demands that Maggie dance attendance on her while she recovers – because, she says, there is no one else. Maggie feels she has no choice but to drop everything and comply.

On the way, she stops on a whim at an ancient Native American earthwork, and what she experiences there leaves her reeling. An old woman who may – or may not – be the reincarnation of a Native American spirit charges Maggie with nothing less than Earth’s renewal.

But first, Maggie must bind the family wounds she created in her darkest hours – and with little more than an ancient turtle effigy as her guide.”

Ms. Cantwell’s Transcendence series takes a different approach to the Earth’s renewal than any of her other series thus far. It’s a chronicle for the personal journey of Maggie Brandt and how her decisions in the past affected so many close to her. Even though those choices were what was best for her at the time, they had negative consequences for others.

Maggie has mixed feelings about returning to help her ex-mother-in-law, Ruth Brandt, through her upcoming surgery. To delay her arrival she decides to visit the Native American earthwork mounds she passes on her way. In the Great Circle of the mound she receives a vision, from the past, of her earning a copper turtle effigy. In her present life, Maggie happened to find this turtle in the woods behind her house when she was a small child and has cherished it ever since.

When leaving the earthwork she is puzzled by the vision. Then an older woman who calls herself Granny gives her a personal prophecy, which includes a quest she must complete to assist in the Earths renewal. Maggie is told:

Three doors will close to you, and you will close three more of your own free will. Then and only then, will the right door open. When that occurs, you must walk through and quickly, because it will not stay open long…For it is only by humanity’s renewal that the Earth itself may be renewed…

Maggie knows at this point she needs to mend fences with Ruth as well as her own children, and their father she divorced years ago. Maggie is completely vexed about her vision and Granny’s words. She is left with figuring things out for herself, and this is her journey.

Ruth was never a woman who was easy to get along with. She turns out to be just as demanding, outspoken, and as bitter as she has always been. She is a master at manipulation, and seems to feed off discord. Maggie is met with several obstacles and diversions along the path she must maneuver around. Old and new family secrets are revealed, which Maggie handles with great skill. The plot has a nice steady pace and the characters are well defined. The dialogue was engaging and realistic as well as fitting each personality perfectly.

Maggie in the Dark has a Women’s Fiction feel to it with a bit of Magical Realism mixed in, thanks to Granny, Zed, and the earth mounds. I only noticed two doors closing that Maggie closed herself. So, the story arc is incomplete at the ending. However, I think Ms. Cantwell found a good place to stop and can’t wait for the continuation.

Maggie in the Dark is the first book in Ms. Cantwell’s new fantasy series, Transcendence.