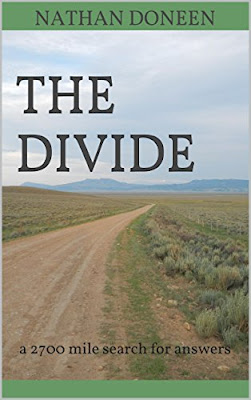 “How far would you go to answer a simple question?

After his final year at university, Nathan Doneen wasn't satisfied with the direction his life was heading. He had doubts … he had questions. In June of 2013, Nathan set out on his mountain bike to search for answers along the Great Divide, a 2700-mile route that traces the Continental Divide from Canada to Mexico… and he set out alone.

Thrown into the world of erratic weather, cramped bivy sacks, and overwhelming solitude, Nathan was continually forced from his comfort zone, putting his personal growth on steroids.

With both his future and past in mind, Nathan's revealing and honest account illustrates the challenges of the route—and life—and how it's possible to find the strength and courage to move past them.”
Author:
“Nathan Doneen grew up on a wheat farm in the Palouse Region of Eastern Washington. After graduating from Eastern Washington University with degrees in Biology and Environmental Science, Nathan rediscovered his passion for adventure and for writing. He is currently pursuing both...”

The travel memoir or narrative has long been one of my favorite non-fiction genres. Part of that is the obvious. I love to travel and since being on the road all the time isn’t feasible, experiencing new places and things vicariously is an alternative. But it’s more than that. A good guidebook or the right internet site can take you to the same places. Besides that, the way you experience a place will be different than how anyone else does. (In fact, in some instances I’ll have been to some of the places myself and the vicarious experience is replaced by comparing notes, which was true for much of this book for me.)

Books like this, what I describe as a travel adventure or quest, with a specific, usually difficult goal involved (in this case, riding a bike on roads and trails that roughly follow the Continental Divide of North America from well into Canada to the Mexican border) are also entertaining and interesting to me for other reasons. Getting a feel for the logistics of such an undertaking satisfies the curiosity of my more analytical side as does the problem solving involved when unanticipated problems come up.

However, there is a third item that I find essential for a travel memoir if it is to hit the highest mark for me, putting the journey chronicled in the story into a bigger perspective. What did this experience teach the author about life, the world, and his or her place in it? It’s this area where The Divide excelled. In between the day to day adventure and problem solving, Doneen considers his life thus far and where he wants it to go from there, not unlike a coming-of-age adventure novel. But even better, it’s true.

Added for Reprise Review: The Divide was a nominee in the Non-Fiction category for B&P 2015 Readers' Choice Awards. Original review ran December 28, 2014