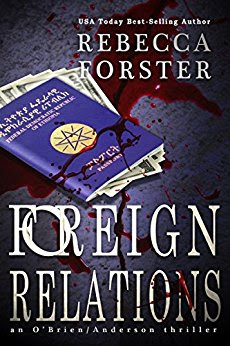 “Traffic in downtown Los Angeles turns hellish when a woman hurtles from an overpass and crashes through the windshield of a car on the 110 Freeway. Narrowly escaping death in the epic pile up, Detective Finn O’Brien and his partner, Cori Anderson, throw themselves into the fray: Cori to triage and Finn rushing toward the flaming car in a desperate bid to save the woman. But survival is not an option. As the car explodes in a fireball, she dies in his arms. When her autopsy reveals a gruesome secret, Finn is determined to prove her death was no accident. Together with Cori, he follows a twisted trail that leads into the veiled and exotic world of L.A.'s exiled African community, the luxurious enclaves of Hollywood and finally to the doorstep of a third world despot whose cruelty knows no bounds and whose influence has a stranglehold on the City of the Angels.”

This is only the second book in the Finn O’Brien Thriller series and already I feel like I’ve turned into a raving fan. In my mind, the case Finn and his partner Cori are working on doesn’t matter. They’re the reason I’m reading. The police procedural series that I’ve liked the most drew me in because of the appeal of the regular characters. That’s the solid foundation that’s needed for any series to succeed. Here, it’s not only the positive attributes Finn and Cori bring to the table (integrity, doggedness, and loyalty to name a few), but their imperfections as well, which lay that foundation. Not being able to tell the other how they feel about them is just one imperfection both share.

Of course, the story still has to work, and this one does. It combines international intrigue and Hollywood in the kind of story that could only take place in Los Angeles. Multiple story threads take unexpected twists before they all come together as Finn and Cori nail the culprit. I’d like to claim I saw it coming. The clues were there. But nope, that’s not who I would have guessed was whodunit.

While the second in a series, this book can be read as a standalone.

My review is based on a pre-release ARC and I can’t judge the final product in this area.