Review: The Rocker and the Bird Girl by Rod Raglin 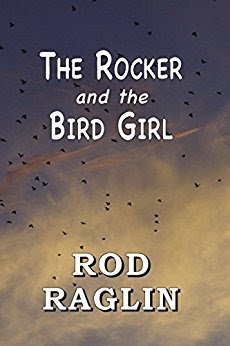 “If someone called Mattie a bird brain she'd take it as a compliment. She loves birds, has spent her entire twenty years surrounded by them and believes they are more intelligent, loving and loyal than, well, most anything else in this world.

Now granddad was gone and so was the money to support the sanctuary. In her desperate search for funding to keep the refuge open Mattie had read that lead guitarist and lyricist Bodine, of the notorious rock band, Seditious, owned a Macaw as a pet.

The guy was obviously fabulously wealthy. Maybe he'd like to spend some of that money saving these beautiful, precious creatures instead of on drugs and expensive toys?

He wasn't answering her emails so she guessed she'd have to try to get his attention at the Seditious concert that was coming to town. She'd never been to a rock concert and wasn't looking forward to it, but desperate times call for desperate measures.

Sex, drugs and rock 'n roll have taken their toll on Bodine, lead guitarist and songwriter for Seditious, the chart topping, outrageous rock band. He's just playing the part until something better comes along. The problem is what's better than being a rich and famous rock idol? Certainly not helping some over zealous young woman save exotic birds, even if his best friend is a Blue and Gold Macaw.”

Rod Raglin lives on the west coast of Canada where he works as an author, journalist, and photographer. For more, visit his website.

The Rocker and the Bird Girl has a lot of elements that would lead me to expect I’m going to like it. Things like a tie to the music business, a budding romance, someone trying to make the world a better place, and characters that challenge your expectations. While some of the story is predictable, it should have been an enjoyable read. It fell short. Why? Due to the atrocious job of proofreading it received. (Assuming someone actually did proofread it.)

More than twice as many proofing issues (typos, missing words, wrong words, etc.) than I would find acceptable in a book twice as long.