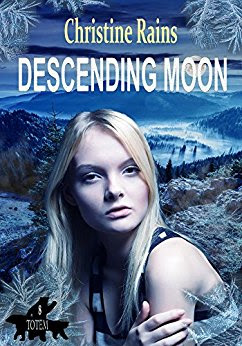 “Some say the moon is for lovers, but wise folks know to fear it.
Kinley Dorn must be strong for her family in these dark times. Sometimes she feels she’s all that’s holding them together. But when the frightening Moon Man attacks and bestows a burdensome gift upon her, Kinley might have to do more than simply help her family. She will have to battle a god, but which one? If it’s the sly man hunting her in the astral plane, Kinley might not make it out alive.”

This addition to the series centers mainly on Kinley and the myth about the Moon Man. Ms. Rains has done a wonderful job building her myths in this series. The plot moves fast as Christmas is approaching and the bear totem looms closer than ever. So why has the Moon Man chosen Kinley to terrorize?

One thing I really enjoyed was a larger role for the local vampire, Bert Ellsworth. The Dorn sisters are building and designing Bert’s new home in the wilderness. Ransom, Kinley’s boyfriend, is also Bert’s personal assistant. His help becomes dire for Kinley and I hope to see more of him in the future.

Descending Moon is action packed and full of tension with a shocking ending on more than one level. That fact alone makes book eight exceptional. I’m not sure how they are going to manage getting all the tokens to put the totem pole back together to save all shifters in one more book. However, I am looking forward to finding out.

Descending Moon is book eight in the TOTEM series. It is important to read this series in order as events build, and characters grow from other books in the series.

Be warned about sensitive adult topics and there are several F-bombs.